WOTSONTELLY. BEING FOR THE BENEFIT OF MRS RAFT

"Good grief, are there three Snows? " 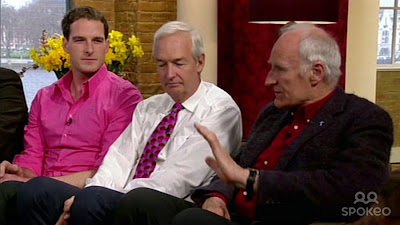 Herditary broadcasters discuss how they might better serve the public.

Yes, there are three Snowmen, cousins, all descended from generals and bishops; in the middle, the execrable tosspot and excuse for a journalist, Jon, Jon Sox,  the Bruce Forsyth of newsreaders.

Jon has a job for life fronting Channel Four News and flying all over the world but especially to Washington, to be near the senators and the president, if only for a day or two.  Apparently C4 can only report on serious Uncle Sam stuff by having Jon whizz over there and stand in front of a camera - wearing stupid socks and stupider ties - at the Lincolm Memorial, wetting himself at the whole  divine Americanness of it. All expenses paid.  By us.  Jon has won the luvvie-journalist's equivalent of the Oscar many times  and been praised all around the Street of Shame.

On the right is elder swingometer statesman, Pete, a  former PBC news presenter whose windmilling arms and inane commentary in days of yore briefly enlivened  the corporation's general election coverage.  But not much. His unfailing contribution to election night was his gibbering that we wouldn't know the result until the result was in,  genius. He quit in 2005, claiming he was too old, which he was, as well as too stupid and good for fuck all, although the reality is probably that the PBC wanted the more telegenic but equally worthless Jeremy Vine to dance around its increasingly technological - and expensive - election coverage; Jerry does execute a mean two-step over the flashing constituencies, looking like a prick.

Pete's main contribution to broadcasting, though,  is the launching of the career of his son, Dan, as yet another  scrappy, ill-informed telly-historian.  Peter joined Dan in many of his first programmes, co-presenting and lending spurious gravitas to the younger nincompoop but of course Dan made his career entirely on his own merits with no help from his father or his father's connections at the PBC, despite all the evidence to the contrary.

The older Snowmen are overly  married, Jon recently dumping his thirty-five year partner for a more exotic model - don't you just hate that? - and  Pete has a platoon of children from various partners. We must hope that he can find them all jobs in the family business;   Christ,  it's bad enough having only two Dimblebys shitting in our faces from the Great Latrine of State; three Snows adding to our daily effluent is  nowhere near enough.
Posted by call me ishmael at 13:11

Email ThisBlogThis!Share to TwitterShare to FacebookShare to Pinterest
Labels: wotsontelly

John Socks keeps forgetting he's just a teleprompter reader. It's why broadcasters dump their teleprompter readers when they get older and above their station.
John 'welcomed' a Republican on his 'show' last week with 'well senator how does it feel to destroy the chance of free healthcare for the poor'. Or something to that effect.
Total Obama luvvie.

Through the miracle of the internet I found a 2007 story in which the MoS was obliged to grovel to Snow and admit that the story about his affair was untrue.

"The paper tracked Williams, a freelance journalist who has been published in the MoS in the past, to Berlin. An interview took place, and quotes purporting to be from Williams formed the basis of the first week's instalment, which ran on page 3, under the headline "Jon Snow and a girl called Precious". The story was short on detail about the alleged "affair" - Williams was quoted as saying: "It was like a friendship that was also a relationship when we got together." There was only a short quote from Snow, who had been given little time to respond: "It doesn't ring a bell with me at all," he said. Later, he later denied ever meeting Williams."

Then in 2010 he married Precious Lunga. Both Williams and Lunga share the same first name 'Precisous' and both are black and of a simlar age, although they have different professional backgrounds (i.e. they are not the same person).

Precious Williams was writing a memoir about growing up in care while Precious Lunga is a medical researcher. I do not have much sympathy to spare for the Wail but it was on the right sniff with the general story.

Of course, as a single man who had found a woman to bear children from him out of wedlock there is no reason why he should not have married someone else. We do not have common law marriage down here so Colvin was making her own decisions as she saw fit and, for all we know, may have been pleased to be shot of him.

Doesn't have to be Obama, mr tober, any Democrat president'd do. It's a baby boomer thing. Snow, like Gordon Brown, believes the Kennedy family and all their partisan succesors in office - filth, like Clinton - to be divinely ordained. Whereas I believe them all to be gangsters, more culpable, more loathsome, for their liberal pretences, than are their openly redneck so-called opponents.

Viewing Jon Snow we should never forget that his is the channel of The Word, Big Brother, Brookside and Shameless.

No wonder he's so vile.