Oranges are not the only Figs

In the previous thread, mr mike reminded us of D.H. Lawrence's poem Figs, from his 1917 to '28 collection Unrhyming Poems. It isn't short - but then David Herbert was not renowned for his brevity - and, whilst referencing a sexual activity regarded as shocking at the time of writing, it is both misogynistic, a tad racist, and expresses male fear of emancipated women. Larry Kramer imported it into his screenplay for the Ken Russell 1969 film Women in Love and placed it into the mouth of Rupert, whose ambiguous sexuality perfectly suited the actor, Alan Bates, his career demanding that he be regarded as a ladies' man, but whose sexual preferences lay elsewhere. Bates reconciled his dual sexuality by choosing many roles with an aspect of homosexuality.
Figs
The proper way to eat a fig, in society,Is to split it in four, holding it by the stump,And open it, so that it is a glittering, rosy, moist, honied, heavy-petalled four-petalled flower.Then you throw away the skinWhich is just like a four-sepalled calyx,After you have taken off the blossom with your lips.But the vulgar wayIs just to put your mouth to the crack, and take out the flesh in one bite.Every fruit has its secret.The fig is a very secretive fruit.As you see it standing growing, you feel at once it is symbolic:And it seems male.But when you come to know it better, you agree with the Romans, it is female.The Italians vulgarly say, it stands for the female part; the fig-fruit:The fissure, the yoni,The wonderful moist conductivity towards the centre.Involved,Inturned,The flowering all inward and womb-fibrilled;And but one orifice.The fig, the horse-shoe, the squash-blossom.Symbols.There was a flower that flowered inward, womb-ward;Now there is a fruit like a ripe womb.It was always a secret.That's how it should be, the female should always be secret.There never was any standing aloft and unfolded on a boughLike other flowers, in a revelation of petals;Silver-pink peach, venetian green glass of medlars and sorb-apples,Shallow wine-cups on short, bulging stemsOpenly pledging heaven: Here's to the thorn in the flower! Here is to Utterance!The brave, adventurous rosaceae.Folded upon itself, and secret unutterable,And milky-sapped, sap that curdles milk and makes ricotta,Sap that smells strange on your fingers, that even goats won't taste it;Folded upon itself, enclosed like any Mohammedan woman.Its nakedness all within-walls, its flowering forever unseen.One small way of access only, and this close-curtained from the light;Fig, fruit of the female mystery, covert and inward,Mediterranean fruit, with your covert nakedness,Where everything happens invisible, flowering and fertilisation, and fruitingIn the inwardness of your you, that eye will never seeTill it's finished, and you're over-ripe, and you burst to give up your ghost.Till the drop of ripeness exudes,And the year is over.And then the fig has kept her secret long enough.So it explodes, and you see through the fissure the scarlet.And the fig is finished, the year is over.That's how the fig dies, showing her crimson through the purple slitLike a wound, the exposure of her secret, on the open day.Like a prostitute, the bursten fig, making a show of her secret.That's how women die too.
The year is fallen over-ripe.The year of our women.The year of our women is fallen over-ripe.The secret is laid bare.And rottenness soon sets in.The year of our women is fallen over-ripe.When Eve once knew in her mind that she was nakedShe quickly sewed fig-leaves, and sewed the same for the man.She'd been naked all her days before,But till then, till that apple of knowledge, she hadn't had the fact on her mind.She got the fact on her mind, and quickly sewed fig-leaves.And women have been sewing ever since.But now they stitch to adorn the bursten fig, not to cover it.They have their nakedness more than ever on their mind,And they won't let us forget it.Now, the secretBecomes an affirmation through moist, scarlet lipsThat laugh at the Lord's indignation  What then, good Lord! cry the women.
We have kept our secret long enough.We are a ripe fig.Let us burst into affirmation.They forget, ripe figs won't keep.Ripe figs won't keep.Honey-white figs of the north, black figs with scarlet inside, of the south.Ripe figs won't keep, won't keep in any clime.What then, when women the world over have all bursten into affirmation?And bursten figs won't keep?
Probably best to cook them at the height of their ripeness. I find that Lidl sells figs that go over after only a couple of days, so they are perfect for this glittering, rosy, moist, honied confection: 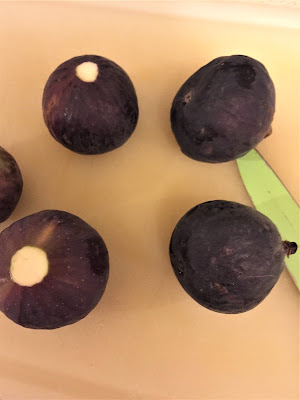 Or you could pluck them from the fig tree in your conservatory or back garden. 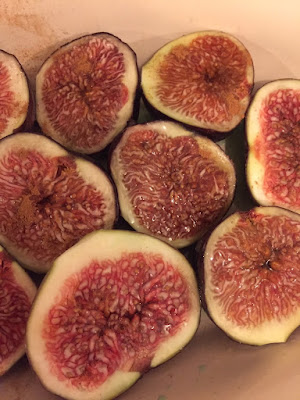 Slice in half, to reveal all that crimson through the purple slit, arrange prettily in an oven-proof shallow dish and annoint with a liqueur of your choice: 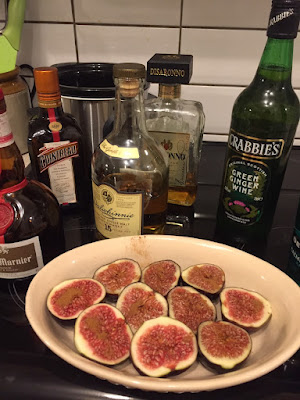 Insert into a hot oven, turn down the temperature to prolong the cooking time, then serve with a nice thick cream: 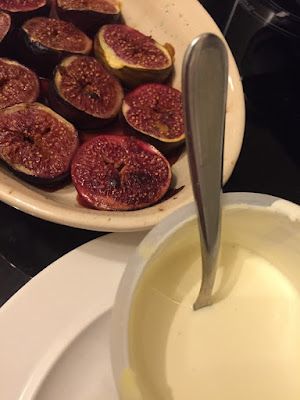