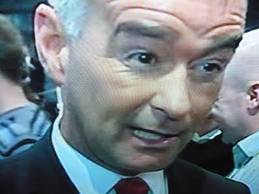 SHERIDAN MUST SUCK HIS OWN DICK FOR SIX MONTHS, RULES SCOTTISH PRISON SERVICE.
Scottish firebrand politician, Tearful Tommy Sheridan, is to be released on parole after serving one third of the  three-year sentence, imposed  upon him for his principled fight against  the evils of capitalism in all its forms, apart from in  the sex clubs, brothels and drug dens of the North Western England.   The only catch in the early release deal is  that Sheridan must shut his gob for six months, in public, at least,  and not go banging-on about the injustices of his life, his position and the failure of Mr CallHimDave to be held to account over l'affaire Coulson - or, Tommy, one might add, sotto voce, anything else.

Not usually known for its generosity of spirit,  the Scottish Prison Service inadvertently  does the nation and the aural environment a temporary and all too brief  service.  To be spared, even for six months,  the sexist, incoherent, foam-flecked, fist-waving demagoguery of Mr Tearful Tommy Sheridan is, in these hard times, a welcome blessing, one tempered only by the knowledge that  Mr Sheridan's fellow celebrity and his advocate, Mr Aamer Anwar, will,  in his uniquely outraged and tongue-tied manner,  be self-righteously filibustering his way around the TV studios, ranting about his client's purity and dedicarion to public service.  Even facing this self-serving onslaught we might find some relief in the fact that Mr Anwar may not be simultaneously engaged in  vigorously applauding the abolition of the double jeapardy legislation - one of the citizen's few protections against the over-reach of the state's criminal law.

For  the illumination of those living outside this blessed land, perhaps poncing a living off Mr Salmond's oil reserves,  we should mention that Mr Anwar 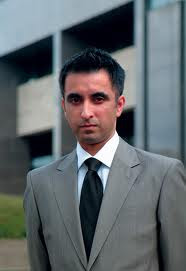 is one of Scotland's most prominent celebrity lawyers.  Pushy, showy and woefully inarticulate, even for a Scottish lawyer. Mr Anwar, a civil rights enthusiast,   has recently been trumpeting that the abolition of the double jeapardy protection means that those whom " everybody knows to be guilty" should be convicted forthwith;  breathtaking stupidity, even from a shit-eating Sheridanite. I tell you, friends, the fifteen-minutes long BBC Scotland Newsnight features a tiny, regular cast of some of the dumbest, ugliest, stupidest and  most repellent  assholes in the country, Anwar being the unlikeley and ludicrously unsuitable default setting choice to pontificate about civil liberties, he's like the Imelda Blair of Jock jurisprudence.

Tommyists around Scotland  - sadly, poor wee crossdressing wifebeaters,  confusing opposition to their hero as endorsement of skymadeupnewsandfilth - insist that the campaign for Salmondism, I mean Independence, must hear the ranting,  tobacco-rasped  voice of Tommy, and no doubt the saintly Gail, too, if it is to mean anything at all.

Mr Sheridan and his media-legal stooges have already hijacked and torched the Left in Scotland,  that they wish now  to cavort in, make Scotland host to a bizarre and  corrosive Celebrity Big Brother Independenc Referendum  House is a self-indulgence too far.  If Mr Sheridan himself has voluntarily  agreed to the terms of his parole -  he could, acting in principle, have served the rest of his sentence - then that should be the end of the matter; principle,  for the baying Sheridanites, however,  is shouty and bullying in its noisesome evangelism and infinitely elastic in its meaning. We must look forward, therefore, dolefully, to Tommy and Aamy berating the nation about its failure to properly honour the coke-snorting prophet in its midst and demanding that the terms of his parole are an affront to human decency.  As if we didn't have enough shot to sidestep. 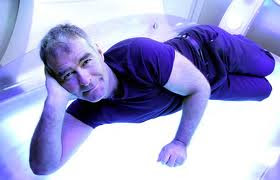 Glamourpuss Tommy, bless, reclining in his macho sunbed,
models his tee-shirt for his avid wee fans.

Next week,  in our Gay Heroes of Scotland series: entertainer and traveller, Mr George Gallowbum tells readers: Why I should be the first Socialist Emperor of Scotland.

A man  peddling Freedom in order that he might enjoy a cushy living
would better starve.....
from Tasty McFadden's Corruption Blues
Posted by call me ishmael at 18:24 18 comments:

THE THINGS THEY SAY. 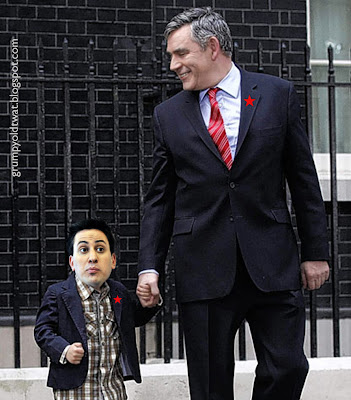 Email ThisBlogThis!Share to TwitterShare to FacebookShare to Pinterest
Labels: MEDIAMINSTER

Email ThisBlogThis!Share to TwitterShare to FacebookShare to Pinterest
Labels: EVENSONG 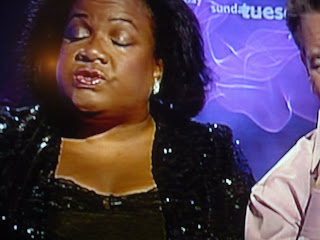 Of course, by sending my son to a private school I am not seeking to set him apart from the riff-raff, workshy, fatherless, drugtaking,  black children in my shitpoor constituency and ally him for life to the children of rich people.  Only I am. That'll be a thousand pounds please, Andrew. And at least if they do sack me from the Front bench of Oblivion I'll be able to come back on the show every week.  Instead of that cheesy old minge, Jacqui Schmidt.  Or Alan Johnson, yes, the one whose missus was banging half the Met.  And him home seckatry.  Well, of course it's not for me to comment on colleagues making themselves look ridiculous but really.....
Posted by call me ishmael at 21:52 4 comments:

Email ThisBlogThis!Share to TwitterShare to FacebookShare to Pinterest
Labels: ABBOTT

ON THE FEAST OF STEVEN. 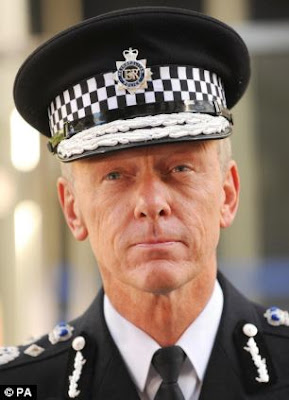 COMMISSIONER HAGEN-DAZ
Those involved in the killing of young wotsisname, the black lad, they shouldn't sleep easily in their beds.  Those involved  over the past decade in the killings of three hundred and fifty people in their custody - ie us - we can sleep as soundly as we like.
Always remember,  there is only a thin but excessively well-armed blue line protecting you from  an outbreak of complete Decency.
Posted by call me ishmael at 17:49 13 comments: