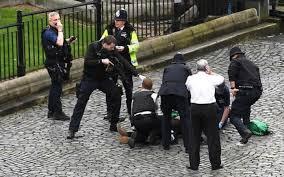 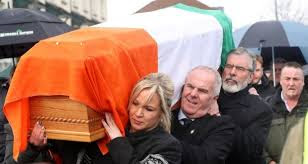 Hey, youse, youse out there, can youse hear me?

said that it was unacceptable, so it was, utterly unacceptable for people to bomb parliamentarians like himself, going about their lawful business, so it was. 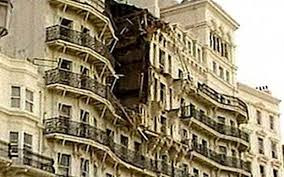 We, in the Provisional IRA utterly condemn acts of terrorism against unarmed people 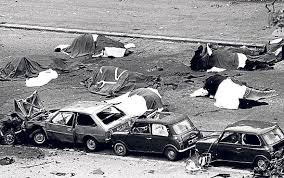 AND THE HYDE PARK GIDDY-UP
ANOTHER FROM THE MARTY SONGBOOK.
and those responsible should be hunted down and punished to the full extent of the law, so they should, and they should definitely not be classed as political prisoners, because they're just common criminals, so they are, and they most definitely should not be allowed out of jail and put in government.
That's just madness, so it is and a total affront to those people who've lost their limbs and lives and families in such a cowardly attack as this, I mean, putting mass murderers in parliament, well, it's just taking the piss, so it is, and we condemn it utterly. 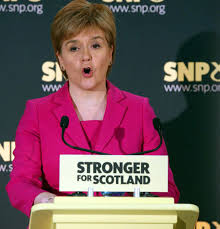 screwed-up her wee rodent's arse of a face and said that this was exactly why Scotland needed millions more immigrants to come and settle in her country, just not English ones. It also proved, she continued, that Donald Trump's policy of excluding immigrants from certain countries until they had been thoroughly screened was just pure mental. If millions a terrorists come tae Scoatland, which, I would remind people, is the sovereign will of the Scoattish people, well, any a they ones who have ambitions tae blow people tae fuck will just be able tae walk doon tae England and do it there.  No, I wouldnae tolerate a border between England and Scoatland.  No way, Jose.

A DEATH TOO KIND

When I was a small child we were still hanging people; you'd hear about it in those Recieved Pronunciation voices on the BBC wireless, on the Home Service, even on the Light Programme, then the equivalents, respectively, of Radio Four and  Radio Two, sop, then as now, for both the so-called thinking middle class, alive to the issues of the day, and the whistling working class. The John Humphries of the day, or the Jeremy Vine, would solemnly broadcast the news that at eight o' clock that morning some hapless neck had been snapped like a twig and then go on to say that there had been protests outside the nick.
Quite right, too.

Used to make my infant blood run cold, it did, them topping people, just down the road, and I have been a Death Penalty Abolitionist all my life. I can't even watch a fictionalised execution without flinching and the real thing almost makes me pass-out. I have managed to avoid seeing the hanging of Saddam Hussein, one of New Labour's great achievements and the Caecescus being gunned down, which I have seen, was at least swift and  brutish, unpretentious, no simpering vicars, and lacking the nauseating pseudo-formality of the Death Row and its grisly sergeants.

One of the reasons I so hated Marty Kneecaps was that he shook my belief, threatened my resolute opposition to state murder;  I had only to see him - or his comrade, Gerry the Nonce - to reflect that, well, maybe some people do deserve a necktie party; maybe it is the only way to protect Decency from cruel Vice, or if not protect, at least avenge, and future-protect.

There has only ever been the one execution which I can watch.  I don't make a habit of it or anything, I think I've seen it twice, on the Nazi shows; it is the hanging, on his own gallows, of the former commandant of Auschwitz, a man so dreadful that his despatch seemed almost merciful, but even if it wasn't it seemed entirely, unequivocally appropriate.
And so would it have been with Marty, a man who, from his earliest, 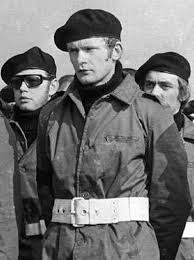 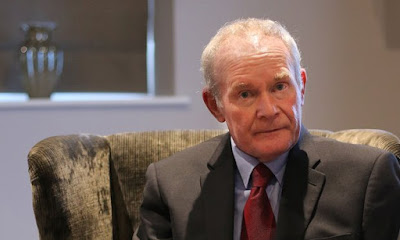 oozed a sinister, sadistic and utilitarian cruelty from every pore;  his were the mindset and the practice of the SS.
Peace Proh-cess be damned, if ever the world needed a man to be hanged, Marty Kneecaps was the prime candidate.

I had hoped, in these latter years of his miserable, obnoxious life,  that someone might shoot him on the street, like the mad dog he was, and maybe just cripple him, as he had crippled so many, leaving him in a painful half-life; death by heart disease seems so very kind an end for one so vile, we must hope that he was as frightened at his end as were the very many children whose limbs he treated to a Black and Decker mutilation;  teenagers pulled from the streets by Marty's nancyboy sadists, the Hard Men, as they call themselves, and savaged by Provisional IRA lawnforcement. I mean,  when we look at some of the members of the Northern Ireland Assembly I can't help but think that we gotta lotta nerve to take-on so, about Islamic State; there is no difference between the headchoppers and the authors of the Birmingham 'pub bombings, the Enniskillen Remembrance Day massacre, the Warrington bombing or countless other murderous attacks on defenceless civilian groups, no difference whatsoever.
War on terror?
It's not too late for bringing it all back home.

Hard to see, by the same token, why we are so hard on Jimmy Savile, whilst eulogising Martin McGuinness;  Sir James, after all, never actually killed anyone, let alone thousands of people, and he  raised large sums of money for other people's use, whereas McGuinness cost us incalculable sums, mind-boggling - the cost of an army, the costs of endlessly rebuilding city and town centres; the costs of drastically expanded emergency services, of prolonged medical and psychiatric treatments, of bereavements, of army and police and civilian widows' pensions, of massively increased police, intelligence and security services; of lost businesses, of courts and trials and incarcerations; of investigations and interdictions at home and abroad.  The harm and expense caused by Savile's behaviours and by subsequent enquiries into them is as a drop in the ocean compared with the ongoing burden caused by Marty's dark fantasies.
And yet Savile - relative to McGuinness a petty offender - is a byword for infamy, while McGuinness himself lies rotting and surely putrid on a fraudulent hero's bier.
Blessed are the peacemakers, eh?
Fuck me, Jesus, it's enough to make the Saviour spit.