A little touch of Harry in the night 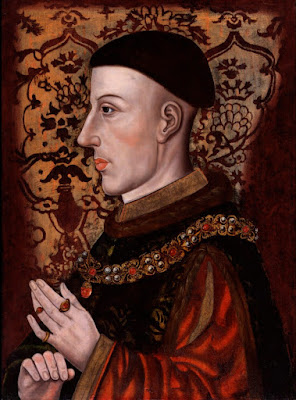 Got myself all poshed up last night and went to see the Donmar Warehouse's current production of Henry V, with Kit Harrington in the eponymous role. Well, not in London, obviously - it is a sea crossing and a 713.9 mile adventure there and the same back again. No, this was a screening of the production at the local cinema. I thoroughly approve of the screenings - means that us oiks in the provinces get to experience theatre that isn't am dram, with your neighbours embarrassing themselves and wanting praised every time you see them in the supermarket. So brave! So out there! Darling, you were wonderful, but I must get on and you need to take off the theatrical make-up now, it's been a week.
Three and a half hours, counting the interval. There were 23 of us in the auditorium - not exactly packed, which was a shame, because it was a brilliant theatrical experience. Not an awful lot to do with Shakespeare, but magnificent theatre despite that. 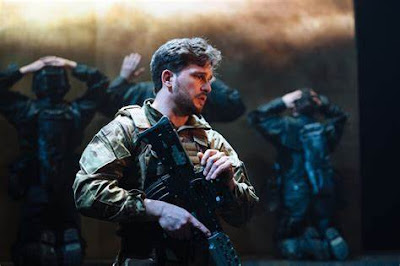 This is Kit Harrington's Henry, just before he slits the throat of one of his captured prisoners of war, pour encourager les autres to breach the rules of war by killing their own prisoners. Which was a thing you didn't do even then. For one thing, it destroyed the possibility of making a bob or two on the ransom. But Shakespeare wanted us to know that Henry was bad ass. And so did the Donmar, drawing its parallels with modern warfare, with a current war in Eastern Europe, and asking us to consider Leadership and Do We Get The Leaders We Deserve? I've got a Post-Graduate Award in Leadership from Robert Gordon University, and I'm probably the sort of Leader We Deserve - there's a lot of paperwork involved, much emailing, motivational team meetings and the odd Options Appraisal, Risk Assessment and PESTE analysis. But I've not yet hung the suit up and donned the khaki T-shirt, unlike President Zelenskyy and Harrington's Henry.
It was a hugely immersive evening, and I recommend it whole-heartedly - but, as so often happens after I've seen the play, I feel that I have been played.  It was tricksy. The music didn't leave you alone, for one thing: there was a vocal quartet singing English music from across the centuries, throughout, bass-baritone Adam Maxey delivered  Purcell’s Cold/Frost song from King Arthur (Ishmael, passim) in the heat of the battle, and we had Zadog the Beast for the peace deal struck between the King of France and Henry through the body of Katherine, with a nice bit of monarchical crowd-pleasing fake grins and robotic waving.
Then there was rendering all the lines spoken by the French characters into French, while the English of Shakespeare was screened as subtitles.
And then there was the sheer wrong-headedness of this modern fashion for re-gendering. Aren't there enough male actors any more, so that they have to cast male parts as female? Hell, no. It's ideological, that's what it is. Shakespeare didn't write enough female roles? Nae worries, we'll just cast women in men's roles. I've been there - I attended an all-female school and played Henry myself. I also played - magnificently, if I say so myself, Darling, I was wonderful - the soldier in A Phoenix Too Frequent. Of necessity - no boys available. But the Donmar could have cast all the parts in the genders they were written for. If they had wanted to. But the play they staged had fuck little to do with the play Shakespeare wrote. Obviously, the Donmar thought it could do better. But here's the thing - the only female roles in Henry V are whores and Katherine, daughter of the King of France. Deliberately so - this is a play about war, male aggression, the violent whims of men, sex between men and women as a financial contract, loveless and mercenary. Casting women as soldiers and as the nobility of England and France gives the impression of an equal society in which jobs are available to women other than selling sex or being sold to seal a peace treaty; which more than dilutes the stark message that old Will of Stratford wanted to convey.
But the real failure of the play, obscured by the clever battlefield sounds, lights, boardroom and battlefield costuming, music, weaponry, helicopter sounds washing over you like Apocalypse Now, was that Kit Harrington wasn't up to the job. He brought his own dynamic to the part - in the obligatory pre-play explicatory interview by a sycophant, he spoke of his own addiction to alcohol and his transfer of alcohol addiction into power addiction (You were wonderful, Darling. So brave. So Out There). His portrayal of Henry emphasised the character flaws - a scene from Henry IV was imported to depict our boy Hal in his cocaine, nightclub and low company years - (think Prince Harry Windsor), the cold repudiation of his now-inconvenient bestie, Falstaff, the readiness to take England into a ruinous war with France on spurious, ego-driven grounds,  the murder of prisoners of war, the perfunctory courtship of Katherine and the forced kiss (channelling Petruchio's "courtship" of another Kate in Taming of the Shrew). Basically, Harrington didn't like Hal and so was unable to infuse him with the necessary charisma to make a good job of the speeches that we come to Henry V for: once more unto the breach, we few, we happy few, we band of brothers. And the rest of the cast didn't like Hal either - a little touch of Harry in the night was rendered as a very suspect thing to do, rather than the inspirational leadership of a King on the eve of battle rallying his troops in quiet conversations around the campfires.
Shame, really. Best get back to Kenneth Bloody Branagh - he did a rousing good job of it. 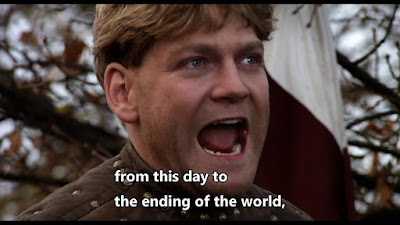 And now for something completely different....

There's a growing volume of filmed theatre, mrs i, and some is vg indeed. Some of it, as you have discovered, has been luvved too dearly. But the very worst is the too clever. "Let's get them all to ride llamas instead of 'orses!" It's just dicking about for the sake of being different. How about learning your lines and not banging into the furniture?

Too many right-on luvvies in theatre. They killed it for me.

The N Koreans are experts at trolling - I do believe Kim invented the genre. Classy stuff. I play golf with Koreans occasionally, Not sure if they are N or S, although I doubt that makes a difference, and nicer more polite people you could not wish to meet.