Back in March, I think,  I promised mr tdg some 'photos of the garden;  since then I have been either ill or recuperating, mainly the latter, bed- and wheelchair-bound, unable to leave the house, really. Unavoidably, I had quite a spell on opioids, HillBilly Heroin, the one is called, Oxycodone, it's like a liquid morphine, only more addictive.  Fuck it, anyway, I just thought, and stopped it.  Took me a week or two to get straight and it'll be some months before it's entirely out of my system.  Don't take it.  Unless you have to.

It has been bugging the life out of me, though, not being able to get in the garden. Just before I was taken ill, I had bought a huge, fuck-off Honda mower; I say huge, it's a vee-twin seventeen and  a half horse power automatic machine but even so it only does a brisk walking pace.  I am getting better, anyway, and managed a trip round the grounds last weekend, operating the mower's throttle with a stick;  every time I have looked out I have felt a nagging reproach for not posting the photos I promised, who said blogging was a victimless crime? 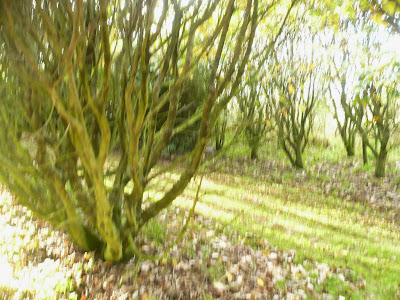 Much as I love the garden and the shore beyond, it makes me a bit melancholy at times. When I was a kid - here we go, one of those back to childhood forays, in which   I always think of that lovely song made famous by Dusty Springfield,  The Byrds and others, Goin' Back "thinking young and growing older is no sin " - when I was a kid, anyway, in Belfast, my big brother who, for perfectly understandable reasons, was my mother's favourite child, saying, insisting, that when he was grown he would buy her a big, fine house with a big fine garden with statues in it.

He never bought her anything.  She died young, high blood pressure aggravated by family turmoil and strife, by a constant, bootstrapping upheaval, as she and my father struggled to send us to grammar school, church, obedience  and insanity.  The rewards of Obedience were never ours.

My brother reacted badly and spent his life being thrown out - of schools, colleges, the army and eventually public houses;  used to be like stepping into the Wild West, going to the pub with Joe, he'd scarcely have got through the door before he came hurtling out backwards, spitting teeth; money was owed, offence had been given; his unerring sense of others' personal weaknesses was, he felt, a counterbalance to the fact that he never bought a fucking round, instead of thanks he offered vicious insult.  He never had any money. He never worked beyond his early twenties. And never mind  a garden with statues in it, the only things I ever knew him buy were flagons of cider.  Sorry, Ishmael, the boozers'd say, down the Robin Hood,  genuinely apologetic, sorry I 'it 'im,  I know he's your bruvver an everyfin but the man's a cunt.

I understood him a bit better than they, I knew what drove him and tried often to mollify him.  Did no good, well, I never thought it would. When we came to this garden it was mostly a ploughed field; years would go by and I would think as I rode around mowing or planting  and pruning hedges and trees that Our Joe'd love this.  He'd had an allotment which he adored, until he embezzled the associations' funds and he was thrown out of that, too;  he understood the seasonal cycles - in a practical and a philosophical  cum spiritual sense - and he would have loved my coastal garden, he would have run himself ragged, chasing  down to the beach, gathering seaweed for fertiliser;  he could've stayed in one of the apartments here and worked away to his heart's content. It never happened.  I had lost touch and all the Googling in the world wouldn't locate him.

His son found me, though, when he died, back, for some mad reason, in Belfast. When he came to visit for a while, after the funeral,   I told Chris about how I had hoped and tried to contact his Dad, bring him up for a Summer's gardening, maybe, dry him out. You're mad, uncle Ishmael, he laughed, you know full well what would've happened, he'd have wrecked it, pissed in your face.  rared-up and insulted everyone for miles around, you'd a had to get the cops.  And my nephew was right, of course he was.  Being right, though,  doesn't mend sorrow, mine or his.

I'll get back to the garden, soon, hearing my brother's promissory voice to our mother and then, much later, to me, as he stood in his allotment, extolling, long before its time, the righteousness of organic growing.    Ashes to ashes, sperm to worm, humus to humus.

And among  all the characters of my lifetime, none, save perhaps mr tdg and others here, know or care about my fine house and its fine garden with statues in it.  And that's fine, too.

The other  garden melancholy, probably the greater, is the absence of my little warm brown friend, who, along with other ghosts,  is the real soul of the garden. 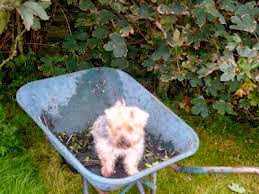 Buster, the blogdog;
out of the corner of my eye,
I see him still,
in a hedge, behind a tree,
grrrrr-woofing
and remembrancing.

You look to have a great space there Mr. Ishmeal, and it all looks to be where it should be.
I'm a Dalesman myself, but also appreciate good gardening where ever it may be.
I had a friend In the Isle of Mann, who went to the big garden in the sky a couple of years ago. Fortunately Manx Heritage caught him on film before he went:-
http://www.manxheritage.org/cms/video_collection_39133.html
Lovely chap.
Alphons

Can't stand gardening myself; drives me up the wall. But I do appreciate the results of those who do like to potter about with the trowel and a packet of fertiliser, and your place looks very peaceful and lovingly cared for. Hope your recovery continues apace.

Lovely little dog Mr I. Just my mental picture of you, as it happens.

I'm a bit too fond of the smokey drinky stuff for my own good but the 2 times i've been nearest to death have been bloody gardening. 1 lawn mower literally blew the fuck up - blades on full centrifugal separation from machine at splitneck speed and 2nd chain saw adaptor brilliantly designed to melt leaving electrocution execution device camoflagued as plug socket. Fuck this gardening bollox thought I - if I am gonna die then would prefer to be pissed out of skull tumbling off a multi storey car park not cutting fucking privet.

Lovely garden though - bit of a bummer being poorly through the best summer for years. I'm almost sure my last word is gonna be 'typical' but it is just bloody typical.

It is an age related thing, mr dtp, as intoxicating as anything smoked or drunk, the garden: didn't come to me until I came here, at fifty and had a small wilderness to tame, current plans are for a thousand daffodil meadow and a natural, wild grasses meadow. Crazy, I know, burying money in the ground, in the form of trees and bulbs but I spend less doing that than I would buying a football season ticket and the benefit to the wildlife is significant to me. People who know tell me that for some migrating birds my garden is their first habitable landfall for many many miles. I don't like birds all that much, can't tell one from another but they and the bees are probably more important to us than the entire works of Apple corp.

Couldn't quite make that link, mr alphons, will try again and yes, mr mike, the noisy little terrier, shouting the odds, worrying at things, taking on the big dogs, that's not a bad image.

Buster is celebrated now, more than mourned, maybe time for a new friend, nobody here has come up with a candidate and the shelters are filled with machoman-reject Staffordshire terriers, poor beasts and not a Yorkie to be had. Much as I despise dogbreeders, I think we will have to buy a new one.

We inherited a flighty daughter's Bearded Collie, once, and had been with her and he to Crufts, SweetJesus, you wouldn't credit the single-minded nastiness of those people, wicked cunts to a man and woman.

I am taking it easy, thanks, mr tnp, a man gotta know his limitations.

Very poignant post Mr Ishmael. I have recently decided to completely abandon all attempts at civil relations with my own brother and try pretending that he is dead, instead.

Seems to be working so far.

I am glad to hear you are on the mend. Long may it continue.

PS Get a cat. I can hazard a guess that you are not really a cat person but if you get the right one they are equally as faithful as dogs. The acceptance of oneself by a cat is, to me at least, so much more gratifying than that of a dog, as it is given only after very careful consideration and only if warranted, unlike a dog's affection, which can be bought with a bone. Not that I don't like dogs , you understand, just thought you could fill the cat shaped hole in your life?

Thanks, mr vincent, I have two cats living in my byre, yum-yum and co-co, we feed them and vet them and make their beds; they are not quite feral, not quite domesticated, though they cost a small fortune. I don't think they would welcome a strange cat moving into the main house.

Good luck with the fraternal strife.

The IOM link is quite a quick connection but a bit.. (well a lot).. sluggish to fire up with the video. I put it down to the Manx electric being just that bit weaker because the Manx fairies that generate it have a hell of a struggle to keep the cage going round.

When Iain IronMan Dale was duffing up that poor old codger in Brighton and the poor old codger's dog started madly biting the wrong bottom, the first thing I thought was that Buster wouldn't have made that mistake.

You're welcome, mr tdg, glad to see you're still around; they're not terriby good images, these, hoping to take some better, Autumnal views this weekend. Have to be quick, the leaves turn, the berries are there and then gone, the birds swoop and the gales come and things become skeletal overnight.

Wouldn't know where to start writing a play, I'm afraid. I have had whole strings of dialogue in my head for decades now but I am no writer, can't make-up stuff, characters, narrative. Rythmn and phrasing, emphasis, melody, that's me, a singer, really, I suppose - but it's kind of you to suggest otherwise.