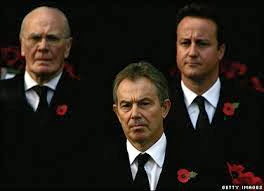 It's getting close to the Poppy season.  Haven't  seen any of the filthsters on the green benches sporting one yet but it can only be a few days away; it's compulsory, these days, at the PBC,  there comes a point when no-one on screen is without a poppy, pinned on, one assumes, by a production assistant, paid for, one assumes, by us.

Maybe it's the extension of Remembrance Day to a month or more, maybe it's our willingness to lionise everyone on TeeVee - nonces, beasts, ignoramuses, cooks, estate agents and mutant sportspersons like Andy Mummy'sboy, Gosh, look, he's so upset he's had to smash his racquet, bless - but whatever it is Tommy Atkins is turning into a revolting luvvie.

There was one, recently, a TA reservist, gurning and moaning his pretty head off for the cameras.  He'd gone out to Affers and found to his amazement that his job involved shooting at people, generally niggers, and doing so with .50 calibre machine gun.  He was really upset about this aspect of his employment.  He had shot Ahmed, some distance away, and over the radios had heard him screamimg for his mother or for Allah, generally making a fucking nuisance of himself, unable to just quietly bleed to death.  And then Uncle Sam's airplanes had,   with surgical accuracy, dripped sticky flaming shit all over Ahmed and his chums, shutting them up for good although not until there had been  another crescendo of screaming and not before these events had traumatised prettyboy  out of his pretty wits. He was one of those boymen, probably had oceans of mothers and sisters and aunts and girlfriend cooing at him, tut-tutting about his unhappiness.

Back home he had nightmares, as most of us do. And from time to time he thought of killing himself, as most of us do.  Poor, poor, pitiful me, he gushed, in profile, poor, poor, pitiful me.... Momma I Got dem ole Post traumatic stress blues, gimme some money, gimme some fame.  I am the new Simon Weston.  Except that the insufferable gabshite Weston at least got proper wounded.

It's not stress, though, is it, it's shame.  Going into a foreign country and incinerating the natives is wrong. Doesn't matter a fuck what Gordon Brown or John Reid say;  if it was that good, they'd have had a go themselves, wouldn't they?

I no longer have any sympathy for Tommy, he's not a conscript, he has colleagues instead of comrades, I didn't ask him to join-up and I certainly didn't ask him to lube the arses of  George Bush, Tony Blair and the British house of commons as they bent over for GlobaDeathCorp.  These guys are, what's the word, hot-to-trot? They have to be.  Mad keen to kill absolute strangers who have done them no harm.  And then, when stranger shoots back, Tommy comes home whining, an emotional basket case, like I give a fuck

PTSD.  It's nothing of the sort.  It's shame, it's fear and it's guilt.  The warmachine has already colonised and debased the word hero - they're all heroes, now, aren't they, even if they are rotten worthless cowards.  If everyone's a hero, no-one's a hero.

Luvvies is what they are, tooled-up luvvies, with a license to kill.  If they don't want to feel shame, guilt and fear, it's easy, just don't join-up. Otherwise shut the fuck up, tell it to the fucking marines.
Posted by call me ishmael at 20:25

I remember years ago when I toddled along to the Army recruitment office being v. impressed with the pictures of young men wind-surfing in Cyprus and having drinkies with respectable gels in Hong Kong. The ageing major sat behind the desk asked about GCEs with no real interest but perked up considerably when I told him that I'd been in the school 1st XV rugby team and was a decent middle order batsman.

In no time at all I was quickly disabused of all that old bollocks - this was 1971 after all. Point is, the same stuff is fed to impressionable young teenagers today, albeit with a little more sophistication. What they are most definitely not told about is the blood, snot and sausage + beans that used to be someones guts spread all over the place. They are never told the truth about why they are out there, just given some bollocks about defending the folks at home, or bestowing democracy on the unenlightened peasants. And they are stupid. Like George Carlin observed, Look at how stupid the average man is - 50% of men are stupider than that ...

That's right, mr caratacus, but they think we're stupid, too. And on top of that, these days, there's no way for would-be not to know about the sausage and beans spillages.