THE THINGS THAT LUVVIES SAY. 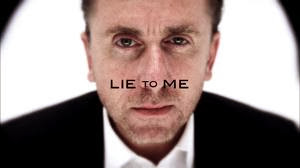 Something happens in the working life of playactors, it gets to seem they've been around for so long, peddling the same old shit - Lady Sir Sean the Wifebeater Connery, tough-guying and kissing the young actresses; the dreadful Ray Winstone, Cockney tough-guying whilst boyishly confused and messed-up; 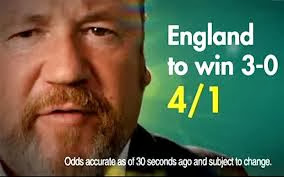 Brian Cox, tough guy spook, he's all over Scottish media, his opinions sought on everything;  a knighthood for wotsisname, the bloke who played a cannibal, a cannibal, I ask you. The seasoned luvvie becomes somehow wondrous,  people, for instance,  hanging on  every whining word of the numbskull, Michael Caine, made anxious by his recurring promise to leave the country if he has to pay more tax. I read things, he says, in the newspapers an' that - he means the Daily Mail - an' it's not as though I mind the tax, it's 'ow they spend it. He means on poor people, not that they actually do that, of course.   You would have thought that the elevation of the drunken vulgarian, Richard Burton and his grasping, village bicycle  floozy, Taylor, a slut for all seasons, 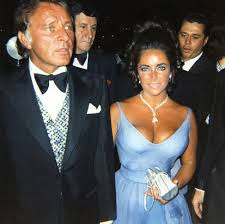 marked the ultimate low point in vacuous celebrity worship but it seems that our devotion to trash  is bottomless.

It has happened now to Tim Roth, trashiness.  Formerly a respectable enough jobbing actor playing roles in interesting films - Rosencrantz and Guildenstern are Dead, Pulp Fiction, Reservoir Dogs, Made In Britain and so on; one thought he was never going to be Roger Moore or that other fruitcake nutjob, Daniel Wotsit, the new double-oh-seven, making costly franchised garbage.....never see Roth in a Bourne film, he's too slight, for one thing... 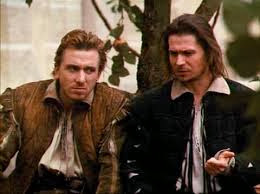 Roth and Oldman, in R&G are dead,
a bit of a tour de force.

........... but a couple of  years ago he was cast as the lead in a MurdochFox TV series, Lie to Me. It was, like all that neo-cop, CSI shite,   a fresh look at police procedurals, although from a civvy point of view, Roth playing an expert in truth divination via his lifetime study of facial micro-expressions - he was a law enforcement-appointed tic-expert;  head of his own institute with a staff of adoring and exquisitely glamourous bints and an endless roster of  glamourous clients.  One look and Dr Cal Lightman, Roth's eventually tedious cheeky-chappy, expat Cockney gabshite character,  would know if a witness, a cop, a judge, a doctor or one of his subordinates was lying 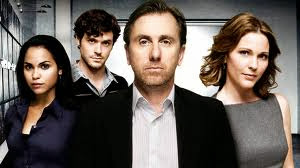 It was  an interesting idea which,  like most such, had a series in it. (The only kind word I would ever utter about the repulsive John Cleese is that at least he and his gang pulled Monty Python after one series, one too many, in my view but that's me. )

Lie to Me  ran to three belaboured series - it started going down as Roth's name started to appear on the producer credits - and then the plug was pulled;  teasingly, though, Timmy was retained on a Fox exclusive TeeVee contract and Lie to Me junkies around the world live - "reading", as Dr Tim taught them,  their  own blinks, frowns, grimaces and tics - in hope of a resurrection, bless their square eyes and pointed heads.

As for Tim Roth,  he, now, also, is a starry soothsayer, his words treacling down to us, like liquid gold; he, also, has succumbed, as do most of them, to the idea that dressing-up, play-acting, falling down, shooting guns 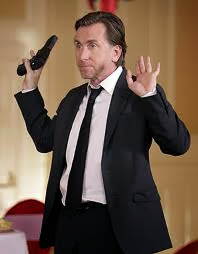 and learning a couple of lines at a time is hard work.  Phwoar, he says, in all seriousness,  I'm absolutely knackered, people have no idea how hard I work, it's all day sometimes, twelve hour stretches.  Like nurses, he means.

For his labours in Lie to Me, Mr Roth was paid $275,000 per episode. Fifty eight episodes were made, forty-nine broadcast;  say $15,000,000, fifteen million dollars in round figures for two years' work. Fucking murder, innit? No wonder they need Oscars and Emmys and Tonys and Golden Globies, working that hard, no wonder they have to take on work doing adverts.

It's right enough to say that if they can get that sort of money, they should, who wouldn't? But it's not them who matter, they are vile in the main, play-actors - vain, stupid, amoral and catty;  doesn't matter how much money they make, the need to show-off will remain, the need to give licensed offence. In better days they were supervised as they plied their iffy trade, by the Lord Chancellor, so corrosive was deemed their very presence amongst decent folks.  The rise of Infotainment has deprived us of such protection and now, with our portable idiot-devices, we are cyber-welded to the most meaningless tripe, our lives postponed indefinitely, hostage to the latest app, the latest device marketed to make easy for us the skills whose difficulty brought us here, from the swamps. I dunno about you but I would get in my car tomorrow and drive to Moscow, without need of an app or a satnav;  I might have to ask directions from some people whose language I don't know but I would manage.  And so it was with diversion and stimulation and entertainment;  we would make them or they would be made for us before our eyes - singers, storytellers, poets, dancers, jugglers and illusionists.  Firstly, of course, it was the shamans and the druids and then the priests and choirs and mummers and then, recently, we developed reproduced sounds and pictures, and then we made them move. Now we beam them from close space, interrupting and devaluing our short lives as though 'twere a blessing. And in my lifetime we have wrought - for we have collaborated in it all - a massive industry whose purpose is to divert us from what is important, our lives,  our dyings and what Power does to us in-between. The livings and dyings of empty headed stars are more important to us than our own. Michael Jackson, the paedophile;  Elvis Presley, the paedophile, Jimmy Savil, the paedophile; within living memory, people would have trampled on your face and mine to get a foot closer to these people. No business, as we say, like showbusiness

Hypocritical, too, they are, about their craft, the luvvies; look at Patrick Stewart, great Shakespearian actor  and starship captain; 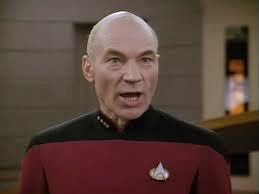 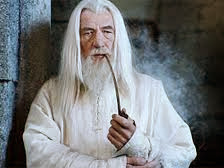 look at all the great Shakespearian wizards, benign and malevolent, in JayKay's - for a time - unstoppable Potter Gravytrain 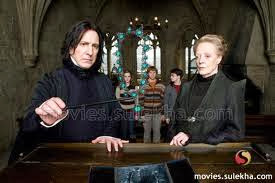 Wizarding, one finds it SO exhausting,  darling 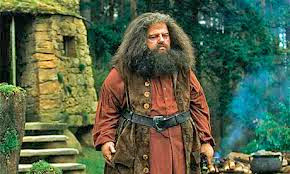 Yer no' kidding darlins, espeshly when yer a useless,
big fat cunt like what I am.

.........these people would do anything  for money, absolutely anything, darling. Nothing wrong with that, it's just that we revere them so, their greed and their tantrums and their fuck-anything-that-breathes concupiscence.  Empty celebrity, another of Ruin's stratagems.

And it's entrenched now in what they have the effrontery to call news and current affairs broadcasting; as well as muffinbrained sportspersons and sportscommentators - who, for a moment, could bear the vileness of Alan Hansen? -   we are increasingly regaled, in skymadeupnewsandfilthworld,  with the thoughts of self-promotional luvvies.  Jon Sox, last night, on C4 PissPoor News, sitting in a pool of his own urine,  as he fawned over a revolting Tom Hanks

Hanks and his luvvie director on C4 News.

- y'know, the thinking man's Mr America, the bloke who saved Private Ryan and died in the process - as Tommy promoted his latest thoughtful  and realistic drama film about Somali pirates and how he beat them off,  just like he beat off the Wehrmacht to save that poor mother's son; 'sjust the kinda guy he is.  I thought Jon was going to pull out his dick and start jerking-off. 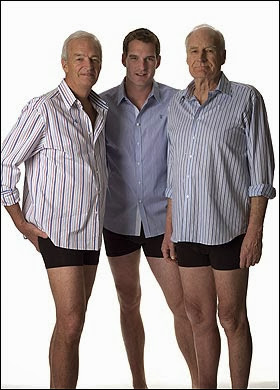 Jon, Peter and Dan Snow, keeping  it in the family

Can't be long before he does, ejaculate over his socks. Perhaps if he could get to interview that great democrat and Nobel Peace Prizer, Obomba, we would see the greatest journalistic scoop of all time.

Older readers will know that Richard Ingrams was the first editor of Private Eye, back before before.  I don't much care for public schoolboys, like him; I know they can't help  what their parents did to them but they're generally cunts, all the same - Rick Stein, Hugh Fearnley Whittingbum, Boris Johnson, the Cabinet,  'nuff said?  But Ingrams has said a couple of things which made sense.  Recently, he said that the dreadfully unfunny Tory git,  Ian Moneybags Hislop - Ingrams' own appointment - should quit his editorship of the Eye to let in some new blood and,  some time ago, years and years, he remarked that after being on a telly panel show, one of his co-guests said how nice it had been working with him.  WORKING??? raged Ingrams, at his interlocutor,  being on telly isn't fucking working. And nor it is. So when Tim Roth tells me he's working his balls off, he's lying.  I can see it in his face.

Tim Roth was bloody splendid in Meantime, a Mike Leigh vehicle for Film on Four. As was Oldman. Babies they were, and I suspect it was what got them their parts in R & G. Well worth a look if you don't mind being catapulted back to the '80s. One of my desert island movies.

They have both succumbed to utter luvviedom but back then they could act as if their careers depended on it.

I am sure he was splendid. I will have a look, thanks, ms lilith. Watching the boxed set of Lie to Me - I have been ill and bored - has made me itch to see R&G again; it's in the box with Girl with the Pearl Ear-ring, The Navigator and the rest of my desert island movies, but I defer it awhile, the instant gratification of our times makes me uneasy. But then I was born and partly raised a Presbyterian.

She was in Glasgow reviewing haggis curry (honest). What struck me was 1) the impeccable scottish accents of the indian women (reminded me of Charlie ? who made a living from his Yorkshire accent). And 2) the fact that Glasgow now was looking a bit Punjabi. Is that how it is nowadays?

Very much so, mr mike, Asian hereditary MPs, too, father and son, all with Weedgie accents. One Asian-Scots MSP a member of salmond's cabinet, promoting independence from England.

Same in Birmingham, Brummie Asians, loikin' it all very fuckin' much but 'atin' them fucking Poles an' Albanians an' wotsanames, Rumaynyans, int they?

It's ok, no real harm done, just a bit weird.

There are THREE Snows, good grief, this is what happens when I don't pay attention. I thought that the older one had been about for an unconscionably long time.

Well, that explains it.

Whenever I see any of these "Objet d'art" I feel like going and taking a good cleansing bathe in Harpic.

Four series of Monty Python were inflicted on us Mr Ishmael.

Never really 'got it'.

Seemed a bit childish to me. That, and an excuse for cross dressing.

Sorry, a confused memory, it was that they refused to take it States-side and write stuff peaking for the advertising breaks, that's how they were different.

I never got it, either, apart from one night when I was almost terminally off my head on Paki-Black. But anything, under those circumstance, would have been hysterically funny or suicidally miserable.

i wisj they'd all fuck off and die, though, the Montys, cleese especially, hunourless cunt.