Well, that was exciting. Will they make it into a fillum? 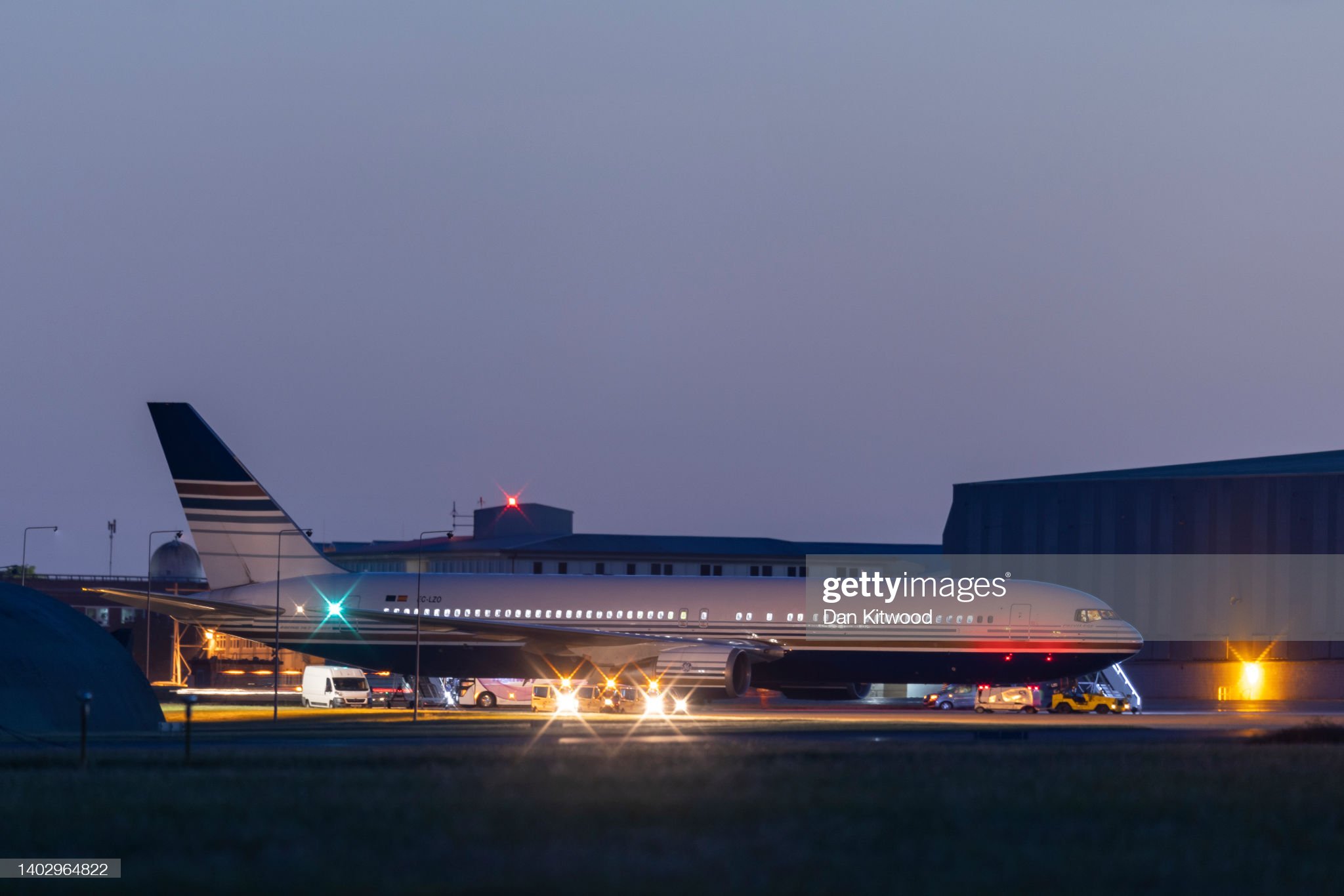 Nail-biting tension, edge of the seat stuff. The plane ready to go, the passengers strapped in, the flight route logged in to RwandaforFuck'sSake. Will it go? Will the stay of execution come through at the last minute? Death row stuff.
The 200 seat Boeing was scheduled to take 130 people against their will to  RwandaforFuck'sSake. Sitting on the tarmac at Boscombe Down Air Base, the deportation flight had a reduced passenger list of just seven by Tuesday. By 10:00pm, there was only one passenger remaining, as successful legal challenges removed deportee after deportee from immediate peril. Would the plane fly out to Kigali with one passenger at a cost of £500,000? And then, amazingly, the European Court of Human Rights, working out of hours to achieve a last minute reprieve, put a stop to the whole ghastly plan - a policy so morally bereft that even Prince Brian weighed into the opposition chorus.
They've not backed down, though - Johnson, Patel and Truss, the ghastly triumvirate: mockery, censure and appalled condemnation all water off a duck's back, as they sense votes in this so bad its almost American  policy. And they are not wrong - I've had people to whom you wouldn't immediately leap up and administer a lengthy rub-down with a house brick, so adept are they in mimicking decent liberal-ish citizens, solemnly assuring me that this is a tremendous scheme, the best way to deter economic migrants from risking the Chanel crossing and that Rwanda is a perfectly safe country. Of course, they don't want Ukrainian migrants to be sent to Rwanda, but then Ukrainians look like us, as they said. Sometimes, however, the legislature and its executive arm have to behave better than the liberal-ish citizenry. If there was a vote tomorrow on the reintroduction of the death penalty - well, you know how that one goes.
Despite international embarassment, despite the condemnation of the ECHR and despite Prince Brian's unguarded remarks, the triumvirate are already planning the next flight. They'll keep it as secret as they can.
Posted by call me ishmael at 22:19

You have the RNLI and the RN doing their best to bring 'em in, and the Immigration Dept doing their best to send 'em out. All at vast cost. For no purpose. Never mind; as inflation kicks in and energy shortages, food shortages, and a record winter freeze beckons, paying passengers will be queuing for those Rwanda flights.

mr mike, I understand that Australia sorted this one out by deciding how many migrants they wanted, the skill set that they wanted and by fairly ruthlessly deterring any migrants attempting to make their own unauthorised transport arrangements.
It hasn't been at all straight forward in the UK. We know fine well that we are a comparatively poor country, with insufficient resource to provide effective health care and sufficient income to buy food, clothing and heating to the people born here, let alone to foreigners. A frighteningly large percentage of the population is dependent on food banks, community fridges and charity shops. The country's housing stock is not up to standard for a country with a cold, wet climate. The cities are overcrowded and filthy. There are beggars and city dwellers who have no home or bed. People die whilst on waiting lists for NHS treatments. High levels of drug and alcohol deaths are the result of people attempting to medicate themselves out of their daily misery. The gap between rich and poor is preposterous for a country that believes itself to be civilised and developed.
And yet the UK is the destination of choice for an awful lot of people displaced from the countries they were born into, who have crossed Europe, camped out on France's coast and crossed the Channel in inadequate boats. Why? Either some Eldorado myth has spurred them on to face hardship in order to reach the country where everything is plentiful or the conditions they have left behind them are truly dreadful indeed.
Either way, something needs to be done. RwandaForFuck'sSake is surely not the solution for a morally competent nation to have arrived at. The Johnsonian line is that the aspirant migrants will be deterred by the knowledge that instead of this Eldorado of foodbanks and homeless sleepers their journeys will come full circle to an African nation whose population was devastatingly reduced by genocide, a grindingly poor and violent state panting for the shitloads of cash the UK has agreed to throw at them for taking our migrant problem off our hands.
It's just not ethical. Johnson knows it. He's in need of an ethics adviser as the last one walked out.

Mrs I: Australia was indeed ruthless and stopped the boats under Howard's watch. There were stories, unverified, of navy boats hearing a bump in the night: "Captain, sir, I think we hit something. Nonsense, boy, I heard nothing". The occupants of the few boats that landed then had to deal with crocs, snakes, spiders and thousands of kms of parched bush before seeing civilisation.

I'm still a little skeptical about these migrants. Someone is organising this. A few year's ago I organised a trip around Europe for me and the missus. Even with relatively unlimited resources, broadband internet etc, it took a lot of planning, and in the event wasn't without a few hiccups.

But I agree with your general point that the Rwanda "solution" is despicable.

In related news, I read Patel has OK'd Assange's extradition.

Come on, folks. The EU - which is France and Germany - is aiding and abetting the trafficking of the throng to the UK. There's a pathway - several. Now I am a liberal - to a degree - I mean I want everyone to be free - but FFS freedom is bought not given. Freedom is won and protected, and if it ain't, it goes away.

The French navy is about nothing. I would round up every cross channel illegal and boat them back across the channel to the beaches of Normandy from whence they came and chuck them off. Let them look at some monuments and signposts as they begin to understand their journey to freedom.

The French? Good for fuck all these last 200 years.

Yes, the Rwanda idea is imbecilic and hateful. Only the Fucking Tories ever achieve that double.