In a previous thread, mr mike said:
"I read it is the Platinum Jubilee. Not really something for celebration. The girl was put in a position and role she was too young and unsuited for. The proof of the pudding is in the eating. The Commonwealth has all but disintegrated or become a joke. The place of Britain in the world is also a joke. Its not her fault, but the reality is she has done nothing and could do nothing. Then we move on to her family - arguably the most important task of a hereditary monarch. What can one say. Dysfunctional is putting it politely. Here in Australia (probably the most loyal colony) a republican movement is ascendant. It will succeed. I don't wish her any ill, but judging by outcomes, she has been useless. Its not completely her fault, because there have been so many bastard politicians, but a stronger monarch would have have done better. She has failed."
Aye, right. The tide of history has turned against her, one would hope - but, judging by the rapturous crowds in London yesterday, the turkeys still vote for Christmas and the British people still love a spectacle. And so do the many foreigners who have flocked into London to witness the rancid, witless, over privileged, entitled parasites playing dress-up in puzzling and arcane uniforms - did you see the hats that Charles and William wore? 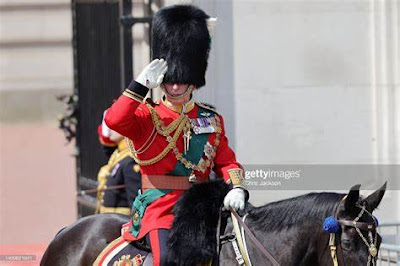 And the ancient tortoise tottering at Brenda's side in the Balcony Shot? Laden with gold rope and medals - is he her latest squeeze? 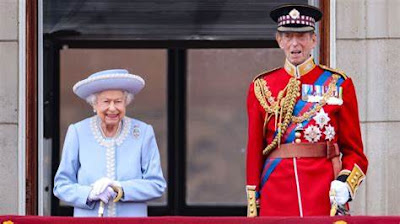 And the next generation of spongers: 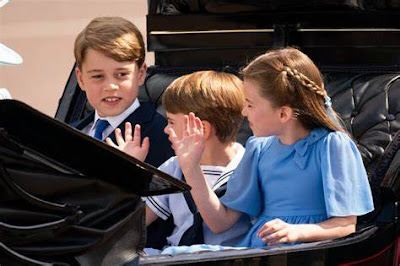 The whole family working really hard. Even Camilla has been totally rehabilitated - her role in the destruction of poor demented Diana, Charles' baby-mother; air-brushed and white-washed out of history. Apart from the really embarrassing ones, who had to be kept out of sight - notably Randy Andy, whose convenient and diplomatic Covid kept him away from the public appearances - it would have been so hard to explain his stupid, porcine features beaming out of publicity photos, should the Americans ever get their hands on him and successfully prosecute him: "Who's that in that balcony shot, the one beside the Queen?" " Ah, yes, him, serving 110 years in maximum security for being an accessory to international child sex trafficking and statutory rape".
Anyway, across Great Britain, the overseas territories, dominions and the Commonwealth, beacons were lit in each city, accompanied by all the pomp and ceremony that could be mustered. Here in Kirkwall, that wasn't very much. Showed willing, though, apart from when the Town Cryer read out the official beacon-lighting speech:

"Today, throughout our nation and the Commonwealth, we are celebrating our glorious Queen’s Platinum Jubilee. Elizabeth, the second by that name, our most beloved sovereign, and Head of the Commonwealth for 70 years. How apt that this should be a Platinum anniversary in her accession, the most noble of metals more valuable than even gold. And so, it is with great honour on this occasion that beacons will be lit this evening throughout the United Kingdom, Channel Islands, Isle of Man and the UK overseas territories, and all of the capital cities of the Commonwealth. We are one nation, and one Commonwealth- God Save the Queen."
Quite a bit of muttering spread through the assembled multitude gathered round the Merkit Cross when they were told they were part of one nation. God knows how the Weegies took it.
There was some desultory Union Jack waving: the beacon was much more enthusiastic: 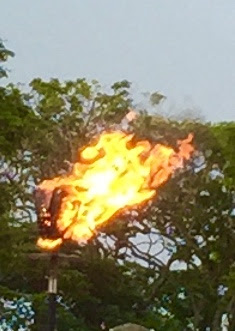 And we had a marching pipe band. 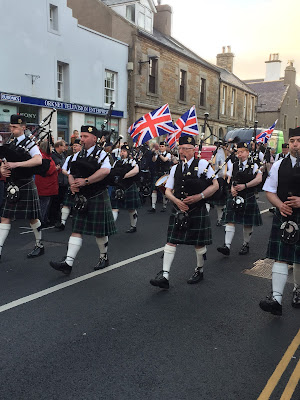 Hope you are enjoying your festivities. I hear that the Queen is not feeling very well today.

Sadly, mrs i, the platinum love-in has passed me by. I did take elder female mongosling to our favourite (secret) country pub for lunch and it was humungoulsy platinum busy and beflagged. Fortunately the throng thronged in the garden under leaden skies, and so we sat inside by the fireplace. Miraculously the "20-30 minute wait" for tucker seemed silently not to apply us us. The best pub in England. I kid you not. Where is it, you ask? I'll never say but if you're ever in Bandit Country, I'll happily stand you a visit.

I did though see a picture of Mrs Fish looking very grumpy. When McFreedom happens, are ye all staying in Her Maj's Commonwealth?

Absolutely no mention of this Down Here, in the most loyal (for now) bit of the remaining Empire. BTW the republican movement under the new govt is girding its loins, anticipating a royal death.

I am wondering about the strength of The Balcony? There is absolutely no doubt that the weight of gold rope and pretend medals, not to mention the weight of the fat arses wearing such, has increased dramatically - even without the presence of Randy Andy.

Mr I coined, for me, the greatest phrase in English literature when he commented on the the tryst betwixt Charles and Camilla: "one give one one". I do hope Editor Verge cam point me to that piece.

Apologies for type: "one gives one one"

There is a picture in the Filth-o-graph of "Prince" Edward with a chestful of medals. On which battlefield did he earn those? Last I heard he was crying and begging to be released from Royal Marine training - though I doubt he ever really tasted real training.

Meanwhile the "people" are shoving cakes down their cake-holes in "street parties". I don't want to insult fellow Ishmaelites, but crikey, what a shithole.

Beats me, mr mike, but it sounds about right!

It is all beyond parody.

it's carry on up the khyber, mrs ishmael

Oh, mr ultrapox - there you are! I've missed you - have you been ill or away?

during my absence, i may on occasion have been both ill and away, mrs ishmael, primarily however, i have been engaged in amassing a stockpile of drugs sufficiently huge to get me through this abominable weekend of shameless neo-imperialist celebration.

apparently, since the duke of edinbra's sad passing, the queen has been in the habit of using a discrete adult-aid which is automatically activated by the motion of her right hand, and i am led to understand that the accidental misplacement - or rather irretrievability - of this personal item has now tragically forced her majesty to abandon participation in any event which would involve waving.