WOTSONTELLY. DEATH AND LIFE. TT: CLOSER TO THE EDGE, ITV

This is fantastic documentary. Extracting the very most from a hugely complex, annual human and mechanical endeavour, this sparkling film looks at the 2010 Isle of Man Tourist Trophy Road Races.  The central rider, Guy Martin, appeared, a while back, in one of those Wasn't The Industrial Revolution Great series, chugging down canals and building small steam engines, frying bacon on hot shovels, that sort of thing;  his appeal was not so much his engineering expertise - he wasn't even of Fred Dibnah's standard - but what singled him out was his failure to even attempt the grammar of TeeVee presentation,  Guy Martin was Mr dead ordinary. 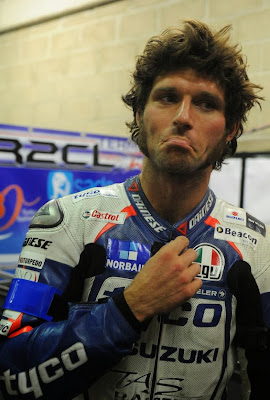 This film reveals that although he's as common as muck, he is far from ordinary -  as are all the other riders, former riders and associates in this,  the most dangerous road sport event in the world, in history.  Amazing fitness, skill and superhuman courage put these guys in another dimension to the simpering  millionaire arseholes of F1.  And they show a repulsive retard  like Andy Murray to be just that, a whining Momma's boy who needs a good, sharp,  regular slap in the gob to help him into the human race.

I always feel a bit strange watching TT stuff because before I was born my father raced there  on his Brough Superior 1000cc bike,  it is impossible for me to visualise him, my father,  flipping his weight around at a hundred miles an hour, but I'm sure he did.  Don't know if he won anything but this film reveals that only a handful of riders win anything, it's the trying that counts.

There are no fortunes in TT riding but there is intense, genuine camaraderie -  at 200 miles an hour on two wheels, cartwheeling,  back-breaking, flaming Death is only an instant away.  Inevitably, there is tragedy in this account but its abiding impact will be its portrayal of all those brave, curious, clever-monkey traits, the ones which brought us from the sea, to the caves, to the cities and maybe to the stars.
Posted by call me ishmael at 01:07

Total fucking mentalists is the term you're looking for. Yup, yer dad was a fruitcake, daft as a brush. It's a young man's game - like drugs I guess, if they don't get yer by 17 chances are you're gonna be fine. Mild disagreement as per F1 - I think these loons would race golf carts until someone died, not sure we can blame the drivers that they got rid of turbo charges. It's a brand now and dead drivers are bad for business which is fine probably.

They do helmet cameras on TT nowadays, fuck me sensible but no, not on your fucking nelly.

Anywho - typed Peter Green into Mr Google after doing one of your old Martin Simpson recommendations and have a full documentary about how blues takes a man. Martin Simpson's got a song 'killing the blues' and it's almost like these guys could do it - you wander off for a piss and come back and white boy's gone and ended blues music. The cheeky bastards.

Thanks, mr dtp, if you feel like a weep of amazement, find Mr Simpson's First Cut Is The Deepest.

I think that by the time I was born someone had left my Dad's cake out in the rain and he was much less fruity, driving a Black and White coach, ferrying factory workers in the week, fishermen at week-ends, no chance of smokey wheelspins in a thirty-foot long char-a-banc.

It's a funny thing, the lack of fatalities in F1, I wonder why anyone bothers going to the track if there's no chance of seeing somebody toasted, I mean, what's the point?

And the ridiculous, oppressive nature of the sponsorship, they're covered in it, millionaire sandwich-board men. All living in tax havens. Fuck 'em. There was a time - Juan Fangion, Sterling Moss, James Hunt, Senna, Rindt, Lauda, most of them survived, some of them didn't. I remember reading Jackie Stewart saying People think this is about speed, it isnae, it's about slowing things down in your mind, so you can take the corner swiftly and safely. It was Stewart who fought hardest for crivers' safety measures but now that they're here why is it that I hate that Lewis Hamilton and his ridiculous facial hair. And that other F1 corporate prick who does the Santander advert, I'd pay good money to see him burn.

The TT, on the other hand, as you say, the helmet cameras bring it all back home, it is fearless lunacy, magnificent; and as I say, it is that which got us here; corporatised Formula One-ers would still be in the ocean. Do try to watch that film on the i-thing.

There is an odd parallel, Peter Green was a modest, gifted, druggy amateur, played for the love of it and not, deininitely not for the fame; the rest of Fleetwood Mac made Rumours.

Michael Schumaker wrecked F1 for me, the same way Scumchester Utd have wrecked football. No need to abide by the rules, zero sportsmanship, blatant cheating espoused as some kind of sklll, not a shred of common decency, which like its cousin, common sense, is not very common. All supported and encouraged by the ruling authorities who turn blind eyes to endless indiscretions because the tail now wags the dog.

Watching that sausage munching bastard ram Damon Hill off the track, preventing him from winning the Championship and thereby securing it for himself was the end of my spectating. Such outrageous cheating should have attracted a ban, not a medal. Despicable little shits, sociopathic meglamaniacs like Ecclestone and Ferguson knighted by the arch traitor Liz instead of sectioned, arrested or both.

Carl Fogarty was a true champion. Someone whose motorbiking skills were what won him all those championships and accolades, not bullying, not cheating, not giving cash to the labour party.

Interestly, Fogarty has a collection of super bikes and crossers, some of the fastest machines ever built, but he doesn't have a road bike. He thinks it too dangerous to ride on the road.

Yes, thanks, mr vincent, I had forgotten the vileness of Schumacker, Ruin's smirking four-wheeled herald.

Thought it was Vileneuve, no matter - job done. What's wrong with suicide bombing an opponent in a car? I thought Schumacher did exactly the right thing - cut out the bullshit. F1 is now a commercial slut but so is fast cars. Vettel, Hamilton, Button - the lot of them, they all seem to want to be Champion, everything else is horseshit - respect. Punters can go fuck 'emselves.

Ah! Mr Ishmael, your father was indeed a lucky man to own a Brough. I have coveted one ever since I first set my eyes on one (about 1945) when a neighbour bought one to make his petrol ration do more miles.
Since then I have had over 2 dozen bikes of various makes and types, finishing my riding career, well past 70, with a BMW R100RT, the best bike I ever had....but still yearning for a Brough. (No I don't know how I would have managed a kick start it at that age).

There's a bikersong, a couple of posts further on up the road, mr alphons.

I used to sit on the Brough, when I was about four, it was in the back yard; he had a Square Four, too. Best I ever had - briefly - was a Honda 250 twin, I broke nearly every bone in my body in one fell swoop and that was it with me and motorbikes. I wish it had been different.

I have had fun with cars, though, and my Citroen C4 VTS is amazing; at 155mph it's faster than any BM, Jag or Merc I've ever owned; Clarkson said it was equipped like a hundred grand Merc and it would blow a hundred grand Merc off the road. But what I really like about it is that if you squint, you can see the lines of the Citroen DS 21 Pallais. I plan to keep it forever.

That, mr dtp, is what is so cheering about the TT, they seem to offer proof that you can be a driven nutter and yet still be a reasonable human being. Nobody would try that Schumacker shit on the Isle of Man.

He did it on several occasions, most likely because he was never punished for being a cheating, dangerous, lying bastard the first time with Hill.

There is no doubt he was good, but he was nowhere near as good he thought he was.

The car, you see. That was the difference. Almost all teams could not compete with Ferrari for around 10 years, and any that came close were simply rammed off the track, either by him or that other prick, his team-mate
Eddie Irvine. Quite literally ANY of the top ten drivers would have won in those cars, and it turned from a competition between skilled drivers to an endless procession of cars doing nothing but maintaining starting positions.

Trying to pretend that watching a tyre change was exciting sealed my disillusionment. The race should be about the driver's skill and courage, not the spanner monkiey's dexterity or the size of the team's wallet.

You're right Mr Ish about Hamilton, I've curled out turds more appealing and with more personality than that little prick (poor cunt gets it from his dad, of course). But you've not mentioned the Scottish anorexic poncing round the pits in his hipsters - he'd struggle to overtake a Skoda.

Cheers dude. Spent a fortnight on this...