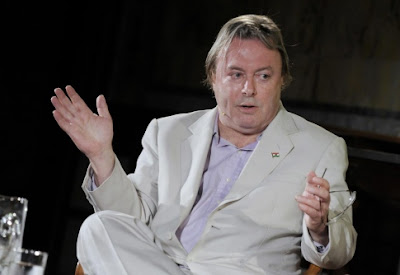 The Goberati is in eulogy-overdrive; small-time entertainer, bully, drunken fatso and Oxxbridge wanker, Christopher Hitchens, has croaked, a victim of over-indulgence in the stupidest of vices; a shame that he wasn't waterboarded to death by some of his Bushite Nazi heroes but cancer'll do.
Like so many entertainers, Hitchens took US citizenship, probably because a certain accent passes, among the drongoes, for wisdom; here, of course, the BBC, the Street of Shame and the public toilets of Knightsbridge are awash with pained, whining voices like his - the educated GoodForFuckAll.
Hitchens spent a waster's lifetime  trawling through the angry labyrinth of his egomania for les mots risque, for naughty, controversial things to say to the repulsive  coterie of tossers who write for worthless periodicals, review each other's books and fuck each other's wives, or chiildren, or both;  the Goberati is aghast, only the screeching Simon Schama being invited onto Newsnight, dozens left out in the cold, desperate for a camera  into which they can pour their measured, erudite obsequies, for the usual fee,  useless,simpering layabouts.
Hitchens' estranged brother, Pete, another right-winger, operating on the same wavelenght of languid, know-it-all supersciliousness underscored with  bottled-up hysteria,  tubthumps for the disgusting Associated Newspapers, is a creature of  the loathsome, redfaced dipso, Paul DayGlo;  be interesting to see if his  almost lifelong rift with Chris will survive the death of one party or if, in true Daily Mail style,  there will be a rapprochement post-mortem.  No business like showbusiness.

The William Zanzinger of his trade, Mr I; a gob on a blob. One more stream of swinery brought to an end. The brother btw is not half as bad, though I shall not be inviting the bugger to tea any day soon.

Oughta be a law against the dying going on TeeVee, milking their ghastly celebrity, right up to the end, still, Blair and Paxman were his fitting interlocutors - as vain, cheesy and worthless as himself.

When the late Ms Jade Goody walked a similar path, the nation's moral arbiters were up in arms, she, though, was just a media whore, unlike Hitchens, who was a polemicist and contrarian, and a media whore. \Good job the class system's been asbolished, eh?