I've brought Richard Durrant to your attention before. Here he is on tenor guitar in his own extraordinary mash-up of The Sky Boat Song and two Bach Minuets. I think it is rather fine. He is performing his new work: Sleep of a King - during a solo tour of the United Kingdom, starting in St Magnus Cathedral in Kirkwall. After Orkney, he will be proceeding South on his bicycle and trailer combination.

His tour takes in the following venues across the length of Scotland and England. There's something daft, but admirable about this endeavour. And the boy sure can play guitar. 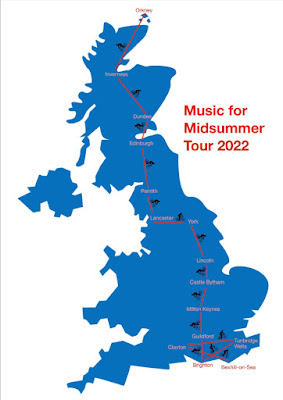 Its amazing what the acoustic guitar can deliver. The different voices and genres. Personally, I'm a big fan of classical flamenco. I even tried. But my brain and fingers don't communicate.

Excellent. The sort of thing we need.

That lad surely can play his guitar.