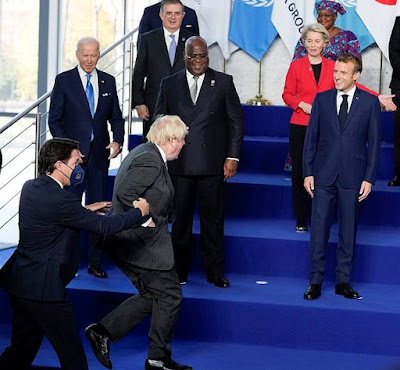 Boris: "go on then, twist my arm, I can be a globalist too"

sorry, that clusterfuck entry was me, forgot to sign it...

for dessert, mr johnson, you may have:

well, in that case, i'll have to go for the hamburger hun

consequent to representations made by the obahai royal family of ogwashi-ukwu and by the anc, i find myself compelled to issue the following amendment to the g20 menu - which i posted above:


strict south-african school-mistress is off

ngozi okonjo-iweala - pictured - is, it transpires, neither south-african nor a schoolmistress, but in fact a proud ogwashian princess, however, in her official capacity as 7th director-general of the world trade organization, princess ngozi takes an extremely firm approach to messy international figures and has expressed her considered opinion that british prime minister boris jobsclown is "not too old" to put across her knee - for due administration of a traditional form of enuani corporal correction.

in contrast, south-african foreign minister naledi pandor - notorious for her strictness as a schoolmistress - has signalled her intense dissatisfaction at having been made to stand in the corner for the g20-class-photo and has also registered her utter distress at having been conflated with a bumptious nigerian aristocrat - mrs pandor has, nevertheless, expressed her profound relief at being located out-of-range of an unpremeditated potus gas-attack, the backdraft from which drc president felix tshisekedi and prime minister boris johnson were, by virtue of their unfortunate proximity to ground-zero, forced to take on the chin.

the white house has rigorously refuted any suggestion, by other world leaders, that president bum-bomb was at the seat of the explosion and has poo-pooed further supposition that the alleged anthropogenic emissions might constitute an environmentally unfriendly greenhouse-gas.

Thanks for the link to the photo, mr ultrapox - they are all looking pretty grim, apart from our Boris, who, as usual, seems to have strayed into a room full of grown ups, to his great surprise and amusement.

au contraire, mrs ishmael, when you click to expand the linked image, all the g20 crowd seem pretty jolly, save for the south-african foreign minister, of course, who looks as if she's either just been outed as a crypto-climate-skeptic, or potentially, just received a pungent pre-phew of biden's international broadcast.