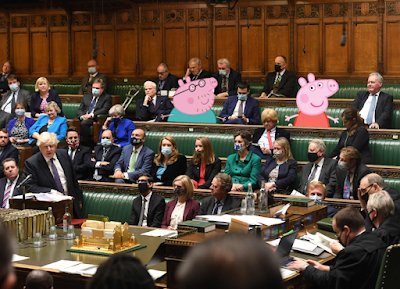 Do you think he likes to be called Daddy Pig in the boudoir? (His wife, after all, is known for her interest in animal rights.)

Thank you, mr verge. Boudoir = sulking room. The term derives from the French verb bouder (to sulk or pout) or adjective boudeur (sulking)— the room was originally a space for sulking in. I'd be bloody sulking, too, if he was my Daddy Pig.

Time for a new Cromwell. It won't happen, so no chance of reform; the UK will continue its downward spiral.

I think that it all started to go worng with the Cones Hotline.

Mr mongoose: I can't think of another country that would have a cones hotline. Uniquely British.

Poor old John Major - just a typo away from a 21 year headstart on BLM.

As a digression, mr mike, I have now watched three Oz cricket captains weeping on the telly. What is going on over there? And it's raining in Queensland! Excellent.

Yes, Mr mongoose, its embarrassing. But its the new normal, I'm afraid. I'm starting to lose interest in sport, what with taking the knee etc.. I have to say, Australia is not what it was when I came here 26 years ago. It is with the older people, and the everyday people, but not the people that project the image of Australia. Fuck them.

Having very little personal interest in watching people running around chasing balls, tripping each other up and performing the victory knee slide, all this wokery, tearfulness and public abasement has actually made sport rather more interesting to me, mr mike. But not much.