An interior corner of the Chapel of Nine Altars, Durham Cathedral.
James Lancelot, Master of the Choristers and Organist, directs the Choir of Durham Cathedral, Durham, England (circa May 2002) in a performance of the Christmas motet, "O magnum mysterium," by the great English Renaissance composer William Byrd (1543-1623).

O great mystery and wondrous thing, that the animals behold the newborn Lord lying in a manger. O blessed Virgin, whose womb was worthy to bear the Lord Jesus Christ. Alleluia. 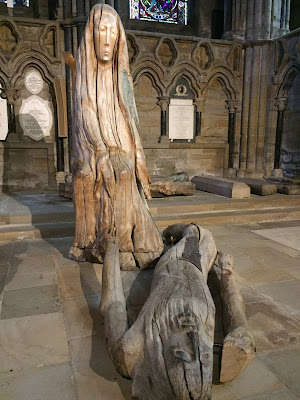 The Pieta.
This sculpture of the dead Christ beside his grieving mother, Mary, is carved from beech wood with the addition of unpolished brass to represent light and life - even in the midst of death, God's light is not extinguished. Mary's presence at the crucifixion depicts the cost of her "yes" to God all those years earlier, celebrated in Byrd's magnum mysterium in the video clip. The Pieta (the name derives from the Latin pietas, pity) was displayed in Durham Cathedral and later placed in York Minster where it survived the fire in 1984. The Christ figure was under burning timber but the mother was saved by a wrought iron screen. Both were splashed with molten lead falling from the roof, which the sculptor thinks enhances the meaning of this sculpture. It was made by Fenwick Lawson, ARCA, between 1974 and 1981. It was purchased by the Friends of Durham Cathedral.
Posted by call me ishmael at 22:37

What do the building, the beauty and the birdies signify, though, Mrs I? What do they, you know, mean? Above all, for what and against what do they stand?

The vile nothings now degrading us imagine themselves unfettered; God does not matter. The consequence, as C. S. Lewis foresaw terribly, is that humanity is abolished.

Everything is a type of gossip.

Never mind. I'm A Celebrity is coming back and Covid Something or Other is Up or Down.

Mr BB: the cathedrals, possibly even the castles, are physical testaments to the history of Britain. They were built as symbols to last forever, of enduring beliefs. One hopes they are not torn down by the new religion. There will be bugger all left.

You will have gathered by now that religion has me frothing at the mouth. I see the variants of Christianity as yet another branch of The Establishment, inc. Very little to do with spirituality or the yearning for the infinite, instead a vehicle for oppression, aggrandisement of power, wealth and an infallible way of keeping the poor from storming the castle: "The rich man in his castle, the poor man at his gate, God made them high and lowly and ordered their estate."
God, whoever and whatever it is, had fuck all to do with it. Inequality and cruelty were always humanity's invention.
However, Christianity has inspired art, architecture, music, sculpture, textiles - it is the fabric of the Western world. The background of our lives. Had there been no organised religion, would any of these great works have been created? Or would there have been another focus for the artistic impulse - which is as much a part of humanity as is venality.
mr bb references CS Lewis. An apologist for the Christian faith, Lewis wrote "The Screwtape Letters: Letters From a Senior to a Junior Devil", teachings from Uncle Screwtape to his nephew Wormwood on how to distract human beings from contemplation of the meaning of their existence and their relationship with the ineffable. I'm a Celebrity and Love Island make ideal Wormwood material, as mr bb reminds us.Here's a quote:
"Indeed the safest road to Hell is the gradual one--the gentle slope, soft underfoot, without sudden turnings, without milestones, without signposts,...Your affectionate uncle, Screwtape.”
We were lucky enough, at one time, to be blessed with the diaries of Debbie, PA to Mr Screwtape - as channelled by mrs woman on a raft.

What else is COP26 than a religious rite? An annual reminder of our wickedness in this life. An annual harangue from the pulpit that we must reform and repent, and pay our tithe to the God-keepers so that COP27 can take place in due course. "Follow the science!" The definite article being used to indicate that part of all science that must be followed. We mustn't follow the other chap's science. That is heresy and is punishable by cyber-burning at the twitter-stake.

Thank, er, God that we have these lovely things to dwell upon and to sustain us together, whether we believe or not. Mr Mongoose is, of course, entirely correct that religious impulse can never be extinguished and will express itself in some form.

It's our opposition that makes me so furious; they hate us and the things we have built, they really do.

PS Mr Mike, your favourite Cathedral is indeed stupendous. I know the Cathedrals matter a great deal to all of us on here.