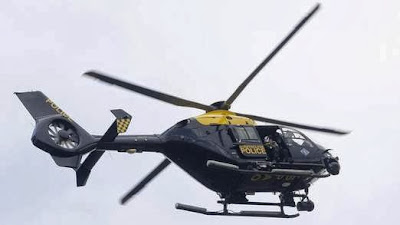 They must be made for insomniacs, like me, wasted on opiates and anti-convulsants, up all night, leaning on the windowsill.  I refer to the reality cop shows, doesn't matter if it's some 20-stone,   redneck sherrif in Arkansas, forcing an SUV ofF the road, YeeHaaing his dumbfuck head off  or some scrubbed and hair-gelled, bi-curious bobby in a BMW high-speed pursuit vehicle; 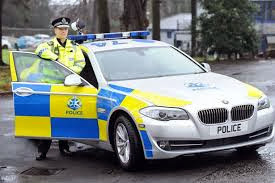 doesn't matter where in the world the action is taking place, the commentary will be by some snarling, unpardonably stupid, dribbling, cliche-mongering Geordie cunt who thinks that he's Clint Eastwood and that a speeding driver is up there, criminalogically-speaking,  witn the serial killers.

After watching a few of these dreadful shows  I concluded that car theft should no longer be a matter for the police.  It's a fucking outrage is what it is,  that there can be ten or twelve copcars and a helicopter engaged in the apprehension and recovery of a knocked-off Vauxhall Astra worth about a hundred quid,  be cheaper just to buy the owner a new car; twenty or thirty cops, their cars and a chopper engaged maybe for hours, just because some fucking shitbrained idiot couldn't be bothered to secure their rusty old banger. 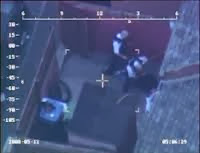 And they drag a scrawny fourteen year old out of a dustbin,  his rodent features pixillated-out and three of them on each of the little fucker's limbs. Job done.

These cops will have frightened the shit out of scores of motorists, the chopper whoop-whooping overhead and the searchlight will have disturbed or woken hundreds of innocent citizens and the costs will be in the thousands, maybe tens of thousands of pounds, junior might get some community service or a few momths in a young offenders institution and eventually the car owner will get his property returned. Oh, they hooked the keys off the hall table, through the letterbox,  with a long bit of something.  Oh, I didn't know I left the keys in it, I was just, just doing something.  Crooklok, no, why should I do that, car's got an alarm,  Disable the alarm?  I didn't know they could do that.

Now, if AstraMan was aware that he and  his thieving insurance company - and not, via the Old Bill, the rest of us - were  responsible for his motor, he would maybe fit a good immobiliser, maybe, if he was leaving it for a while, fit a clamp, too; he would just have to do whatever he had to do, or give up car ownership.  Simple.  It would only take a few instances of the cops saying Yer motor nicked, sorry, pal, none of my business, secured it, had you, move along now or I|'ll nick you.  Word would spread like wildfire, lock yer motor up tight, remove plugleads, switch off the fuel somewhere, fit a crooklok, they work.  And if you have a two hundred grand motor that a specialist thief might hoist up onto a trailer and ship out to Arabia then you can just pay some unemployed English graduate three quid an hour to sit in it, when you park it up, he can work on his master's while he's there,  or, most sensible of all, you could say to Mercedes, Listen, Herman,  unless you  make this car absolutely un-nickable I'm not gonna buy it.  I don't care how you do it, that's your problem.

But no.  Modern policing career opportunities dictate that life must replicate the movies and every fucking semi-literate yellow-jacket  must have the chance to discharge his Taser into some poor cunt with a heart condition, must be able to smack the legs out from under an innocent bystander, must be encouraged to fling some poor woman around the custody suite and most scandalous of all, must , as often as possible, blue'n' two his tyre-smoking way through built-up areas, often in pursuit of a tiny placcy bag of marijuana with a street value of Oh, seven hundred thousand pounds, maybe a million, when its cut with grass clipping, maybe two mill and best of all in high-speed, helicopter-supported pursuit of a stolen car which must inevitably run out of petrol and which, by any evaluation, is not worth the lives-endangering effort of this noisy cavalcade of the stupid, yapping at each in boys'talk jargon.

Coppers yuman  rights though, innit?  Goes with the job.  What is the matter with them.

A little sidebar with myself.  Being a Queen's constable is one of the most important jobs in the country;  why isn't it - at least - a graduate-entry-only profession? Why is it that a few weeks' training and a year's probation is seen as enough?  I'd sack 'em all and start again. 'Snot as though they prevent or solve any crime, not really,  there's just the same hundred thousand or so villains being recycled round the system  every last one of them invited to have scores of other offences, of which they know nothing,  TIC'd, taken into consideration with no added sentence, in order to improve clear-up rates.  Those cops not working for Murdoch or his equivalent are fencing recovered stolen property and drugs, running prostitues or providing intelligence to big-time gangsters.  Everybody knows this is the case,  knows that it is only the thin blue line which protects us from utter Decency.

Anyway, one fell from the sky over Glasgow, a chopper. 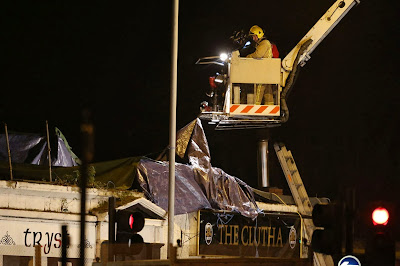 Shouldn't have been there, in my opinion.  Why does nobody ask questions about this?  Are we at war? Is Glasgow like fucking Syria, all of a sudden, Lebanon, Somalia?  Do we gotta have some greater yellowjacket dickhead spying on our Saturday night.  Times are tough, tough choices, austerity;  do we want a helicopter menacing us from above or do we want  intelligent, dedicated  constables  coming from us,  being among us, being with us, of us?  Do we want law enforcement or do we want Mel Gibson?

It doesn't matter a fuck what we want,  the copocracy just gets bigger, more criminal, less accountable and more useless.  I saw the new TopCop of the newly-unified ScottishMasonicPoliceService, he was commenting about the helicopter falling from the sky. 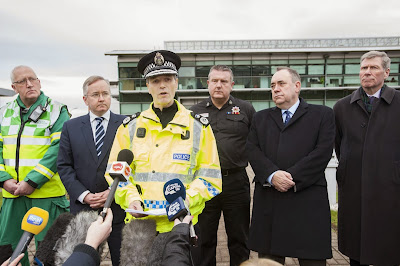 Chief Constable Gob.
That's Salmond, there, posing, on the right, and his  Justice seckatry, Kenny McShitferbrains,
wonder why they're there, perhaps gonna roll-up their sleeves, get doon wi' the dead.  Best not, eh, best leave it to Scotland's magnificent emergency services to whom I pay full tribute and which would be better were I GodEmperor of this great nation bla blah blah

Looked like Princess Diana, he did, Chief Constable Gob,  schooled in faking doe-eyed sincerity  straight from central casting.  Shove it in their faces, give 'em what they want, PR at its best.

And the eye witnesses, seems like people school themselves, rehearse for just such an event, maybe there's a business opportunity, Let Us Coach You On What To Say, If You Are Ever Near An Accident, Catastrophe Or Neighburhood Murder.  They were all rich in simpering, self-depracatory gunge.  Just doin' what anyone'd do,  they chorussed, heroically, angelically, of their efforts in um....err....just doing what anyone'd do.  Make you fucking puke.

Jim Murphy was there, NewNewLabour defence shadow.  Gosh, all he did was what anyone'd do, but he did it with all the steel and insight and thoughtfulness of a lying, thievingbastard politician. 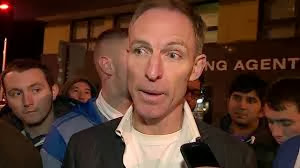 No. y're alright, I can do as many interviews as you like, please.  No I'm done heroing, now that you're here,  the cameras, but I was only doing what any other happenstance hero'd do.

I never understood the phrase turd-polishing until I saw Jim, the other night, now I do.

Get these fucking things down on the ground except for emergencies, proper emergencies, a stolen car is not an emergency and Saturday night is not alright for fighting.  Airborne police? Do fuck off. And do remove the cameras observing mr plod for some future, shoestring-budget, latenight teevee show;  he's too important for that, if he only but knew it.
Posted by call me ishmael at 18:43

That was weird seeing Jim Murphy for hour after hour on the 24hr news.
We didn't see a sign of him for years when he was supposed to be Shadow Defence Sekraty and doing whatever he does now. Overseas Sekraty or something.
The chopper was returning from a job looking for a 'suspected body on a railway line...false alarm'.
What a sad waste of decent lives for something so pointless.

I think he's been Milibanded out, Murphy, maybe seen as too-much-Jock, where Scots once dominate the NewLab front bench I think there's now only the loathsome hobgoblin, Douglas Alexander, left.

".....returning from a job looking for a 'suspected body on a railway line...false alarm'."

They put them up at any opportunity, just because they can. Megalomania. Good job they haven't got tanks, yet.

'Suspected body on a railway line'?

What, the fuck, did that need a chopper for? Was the corpse going to get up and leg it if they didn't get there quickly?

Fucking deadly things helicopters. Used to be in them every day for 18 months working in Gabon. Statistically they're about as safe as a mid-life-crisis motorcyclist riding a 1000cc Fireblade on a B-road.

I though the US police had long since given up chasing speeding motorists for exactly the reasons you posit. Ie chasing them just puts even more speeding vehicles and hence danger on the road. I did the figures with deaths caused by police cars in the UK and mile-for-mile drunk drivers are safer than our specially trained police drivers.

Bad luck if you happened to be down the pub though. Of all the fucking places to crash. A pub. In Glasgow. On a Friday night. The pilot wasn't a muslim was he?

Helicopters are expensive to run, I would like to see Plod aloft by paramotor if he has to go up at all. Course it'll be drones soon, little metal dragonflies charging themselves up in the radiation from phone masts, one on every rooftop. But maybe not, cheap means not as tax-deductible. Remember what happened to the Edgely Optica, the cheap fixed-wing replacement for
police helicopters? Factory was torched.

That cunt Salmond got his nationalist slant in on the act too. BBC reporting that he was proud of the way 'Scotland' had responded to the disaster. Later redacted (by the BBC) to 'How proud he was of how Glasgow had responded'.

I am of the opinion that the person is the thing most needful of police protection, not property.

In a previous life, I found myself summoned to court over a business matter. I'd had the audacity to advertise my business premises without permission from the council. Criminal matter, that.

Long story short: fined 700 quid. The 'man' whose case was heard before mine had drunkenly thrashed his girlfriend in the street, breaking her nose. Fined 50 quid.

That's when I realised what a bunch of cunts the police, magistrates, lawyers, the whole fucking lot of them, are.

BTW I had heard that Glasgee pubs could be a bit rough, but a helicopter in the heed in just taking the piss.

And days later they are still going on and on and on and on about it. Not prurience, not ghoulishness, no. It's proper real news I tell you. When I look back on the news of 2013 it can be summarised by 1. Ed Miliband's Hurt Feelings, and 2. Eight dead in Glasgow pub.