NOTHING TO GROUSE ABOUT


This birdbloke has been marching around the garden for about three years now, looking very pleased with himself; he is lucky that  he is not in the grounds of some of my fellow ex-pats, where  he would have been blasted to inedibility  - why do all the nutters have shotgun certificates? - hung up for a week or so, nonetheless, and his hard, bluey flesh roasted and  rhapsodised over; it really is fucking awful, grouse, better off having some of poultry's  lips, eyes  and gizzards, recycled so successfully  McDonalds.

I'm always pleased to see this chap, strutting, his redbrest stuck out,  but he's some way away from the house and I have never managed to snap him, if, indeed, it is the same him.  He may live in the garden somewhere, he may fly over the wall, although he doesnt look as though he does much flying. When I first spotted him I bought a camera tripod, thought I'd set it up, zoomed-in and ready but it just gathered  dust and I can't, therefore,  tell people Oh, and I keep grouse on my land, well, I can't show them a photo, at least I couldn't.  But I can, now. 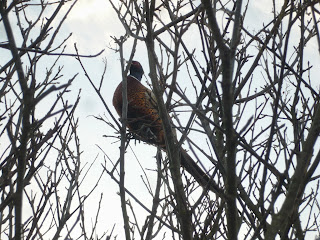 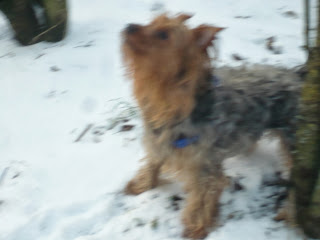 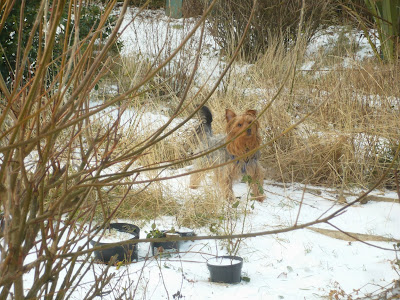 Harris, on his first meeting with mr grouse, treed him,
like a good boy does and would have killed him if possible;  he now knows that he has  a grouse or two at the back of the house, as well as rabbits, hares and hedgehogs and a fluctuating population of cats at the front,  to keep him on his toes.

We were lucky, he is a very good boy,  the most obedient Yorkie we have had, a firm word is all he usually needs,  he has been  trained to start  sort-of whirling when he needs to go out, or drawing attention to his lead and  he has learned several new words, he is a quick study;  he is very affectionate, very boisterous, bright-eyed and  mischievous.  He obviously comes from a good home, his luggage was full of good quality dogbloke stuff, leads and harnesses -  that he had a shoulder harness was good, in itself  - the best that money could buy, his bowls and blankets the same. He is easy to feed, scoffing three or four sachets a day of Caesar. Oh, and a salad sandwich, some Scotch Broth and he is particularly fond of trifle, which he is not allowed, much.  The vetbastard says he's fine, although you can see that by looking at him, and keepng the fifty quid. He just comes and flops firmly beside one's thigh, drops his head in one's lap, sighs and goes to sleep.  Can't want more from a warrior lapdog.

Even so, tree-ing the grouse was the first blog-worthy thing he had done;  he can't get in here just because he's a dog,  a bit more to it than that, if he wants to be the hereditary blogdog. Can't just walk into the job, he's not the Prince of Wales, now, is he?

With Harris's coming we are seeing a bit more of the garden than is usual in Winter. Here, in the land of the Midnight Sun, the seasons are more pronounced than down South, well, Winter and Summer are, not quite endless days in June and not quite endless nights in December.  They are not exact opposites,  there is an hour or two, in summer's wee,  small hours  of twilightish gloom, between 2.00 am and 4.00  but since one is normally asleep between those hours and unaware of them, the daylight seems  endless.  In even the depth of winter it is light between 9.00 am and 3.00 pm,  you can get out and about in the light, if you're quick about it; it can be strange, though,  often the low, wintry Sun is  harsh and electric, almost drawing a pencil line around things. 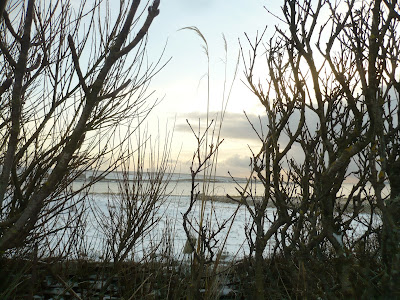 In summer we cannot see through these branches to the Sound, beyond.

This avenue of whitebeam, too,
normally completely  obscures the house.

And beyond here, come Spring,
will be a thousand new daffodils, I keep saying to mrs i,
shoulda been two thousand, five thousand. 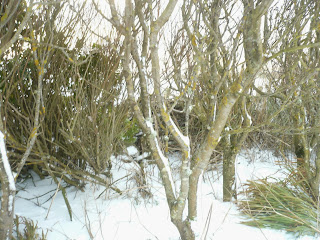 There are masses of evergreens but not on the visual borders
and in winter it's as though we are stripped bare.
I am not bothered about people being able to see in,
there aren't any.
It's being able to so easily see out that unsettles me.

In less than a fortnight, however, Earth will tilt again and we will hurtle into Summer;  nothing MediaMinster can do about that.

Email ThisBlogThis!Share to TwitterShare to FacebookShare to Pinterest
Labels: harris, maybe a blogdog.

The grouse in your pictures look to me as though its parents were pheasants.
It may be something to do with the whiskey.

Does young Harris do stealth or is it charge like Highlanders with full battle cry? Ha ha - the local animals are probably organising committees of eviction since chav-terrier turned up with proclamation of top-dog status. It must be lovely for the fella too having such a playground investigate.

I walk through our local park every morning and see the same folks being walked by their dogs, ever ready with placcy bags to retrieve their shit and it just seems kinda dull. It's the not being let off the leash thing that seems a bit unfortunate for big dogs - stretchy leads can only do so much. We're only 5 minutes away from nowhere so i'm sure it's just a weekday convenience thing but a walled garden with prizes must cheer the lad up. Sooper dooper.

He is a big bastard, wonder how he gets up the tree but he's just like the grouse on the whisky bottle. Terriers don't do stealth, just rip-yer-throat-out charging and barking.

The chimneys have been there for two centuries and so I shouldn't worry but I do. The mortar is full of sea shells, sand gathered from the shore, I think it's just its own weight, holding the place up.

You must see the aurora quite often, Mr Ishmael. Very rarely gets down south; only saw it once, back in `86.

I've worked on enough old buildings over the last forty years to know that it isn't always true that "they built 'em right in those days"(we only see the survivors); but safe to say, Mr Ishmael, the lads who built your place obviously knew what they were about and if the place has stood two hundred years in an environment like that it'll last forever with sufficient maintenance.

Good, massive stone walls put together with care and lime mortar which allows the stonework to breathe and settle gently cant be beat. It's own weight and mass holding all together as you say. That, and many years of habit.

Good to hear the Dogbloke is settling in so well

The other comforting thing, mr tezza, is that it was built - with those three-foot walls - for an important, incoming minister of the kirk - then the equivalent of the magistrate, with all sorts of powers, temporal and spiritual, to make their lives shit, the lads would have done as good a job as they could, urged on by local pious dignitaries. They were a bad lot, ministers, always in cahoots with the lairds in robbing the peasants and keeping them in line. Public shaming was one of their tricks, they had a Shaming Stool in which they would make backsliders sit whilst having a round of fucks fired into them; it was a punishment used especially on women, to whom Presbyterianism was particular cruel. William Smith, the man for whom this place was built, wore out seeveral wives, fathered many children, who now own much of the parish and lived to be 90.

You need to be alert to the Merry Dancers, mr yardarm. I used to get an email from a skywatching university when the lights were due but, you know, tough times and all in it together, I think they went down in the Flood. It is an 11 year cycle and for a lot of our time there has been little activity but when it's good it's good. I must try to see more of the night sky, it is brilliant, here, in the North. More people should visit, more people should relocate. Much of what mr jgm2 says about Fucking Scotland is true, indeed, many Scots say the same things but if you can happen on the right place, none of those things matter, those things are everywhere, but these places, these hills and mountains and skies are only here, in Scotland, the best part of England.

Please teach Mr Ishmael how to use a video camera and upload clips so that we can see Mr Harris springing about in the snow, kicking up diamonds to show us that no matter how small you are, deep inside there is still a wolf memory.

Times are tough but Santa will do his best, mrs woar.