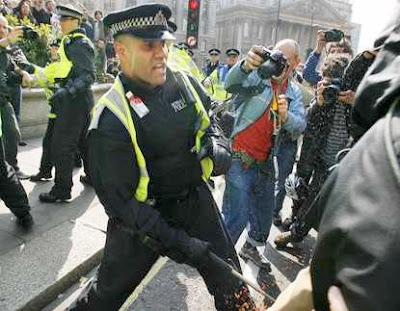 It has emerged that some filthy slag moaning about climate change - which definitely isn’t happening – at the the G2O protests, has complained about my members.

The anonymous bitch, probably a useless public sector employee, a nurse or a teacher and not the sort of wealth- creating professional bankers which our service is dedicated to protecting, said that the police kettled her, kicked her, bashed her with their shields and refused to let her out when she started bleeding from her filthy snatch.


Another slag has complained that we misled her about the wholly accidental death of her old man, a newspaper vending pisshead, who attacked my members’ batons with his legs. 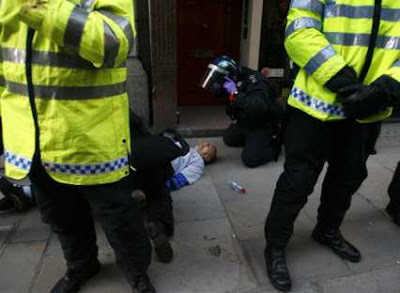 THAT'LL TEACH HIM TO WALK IN FRONT OF ONE OF MY MEMBERS.

There are obviously lessons to be learned from such events and these slappers better learn them. Move along now.

Is the reddish spray in the photograph of our heroic policeperson (near bottom right corner)(a) blood, (b) brain matter or (c) an exploding foetus?

you've obviously got a gift for policework, stan.

ever thought about becoming a qualified police counsellor for battered women, mr stanislav?

So that's where the police are when you need them.

Is violence ever the answer?
I was reading some celebrity gossip today about an argument that ensued over the weekend where some punches were thrown. There are two sides to every story and both parties told their stories from their point of view, with the person who got punched citing that violence is never the answer no matter what they may have said or written about the other person. This left me wondering if this is really true. Is violence never, ever called for?? I'm not sure about this. There is a DEFINITE clear difference between a hate crime type of assault and a fight that ensues during an argument such as the one I read about. I think that it is best to walk away from fights and try to use your words in order to solve any issues but what if a person's words become extremely incendiary to the point where they are knowingly pushing all your buttons ...? What if you pop them in the mouth, do they not have it coming? At this point it is known that words cause great emotional damage to people, the kind of damage that stays with them an entire life time. We have all seen the news reports about children who were the victims of constant name calling that affected them to a point where they got so depressed that they eventually committed suicide. On the contrary, physical violence can sometimes get out of hand and people can end up getting seriously hurt. I completely understand why some people think violence is never an option. However, you know what they say about karma and sometimes it's hard to feel sympathy for someone who seems to be reaping what they sow. I guess violence isn't the asnwer BUT I think what I have issue with is the belief that is is acceptable to humiliate and drag someone through the mud with what you say or what you write about them. Hate speech is just as bad is physical violence. Words can inspire people to do wonderful things as well as really ugly things. So while physical violence is not the answer neither is verbal assault.

Violence often is the only answer but not against children, that is wicked, if you believe in wickedness and just plain unnatural if you don't.

As for the impact of what you call the hate-speech (of the blogosphere) we try here to direct it at the Powerful and the Mighty.

I feel it is is entirely "acceptable to humiliate and drag someone through the mud with what you say or what you write about them." Not only acceptable but entirely responsible. Failure to do so legitimises without demur the awful bloodletting of, just for instance, the Bush-Blair hegemony, the incalculable corruption of those in MediaMinster, the betrayal by spiv bankers in cahoots with bent politicians of old and young alike. I would dearly love to hurt their feelings.


If I thought that anything I wrote upset, even fractionally, never mind destroyed the worthless lives of the authors of our Ruin, I would be much happier than I am, but it doesn't. At best all in this quadrant of cyberspace help infinitesimally, by the tiniest of increments, forge a community of Dissent, to which you are most cordially welcomed.

Were it not, incidentally, for dissenters, we would still all be swimming around in the ocean. Isn't dissent another word for evolution ?