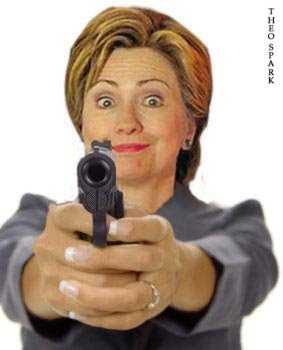 SEE YOU, JIMMY, IF YOU KNOW WHAT'S GOOD FOR YA
THE NIGGER STAYS IN THE PEN.

American Secretary of State Hillary Clinton has personally urged Scotland's Justice Secretary not to release the man convicted of the Lockerbie bombing.
In a phone call to Kenny MacAskill she said that Abdelbaset Ali Mohmed Megrahi should serve out his sentence in Scotland, her spokesman said.
Mrs Clinton's intervention came as Megrahi's lawyers revealed he has applied to drop his appeal against conviction.

A US Department of State spokesman said they were opposed to the idea of Megrahi being released.
He said: "The Secretary of State spoke to the Justice Minister in the last day and expressed again fairly strongly our view that Megrahi should serve out his entire sentence in Scotland."

Lawyers for Megrahi, who has terminal prostate cancer, said his condition had taken a "significant turn for the worse" in recent weeks and that they will be applying for leave of the court before the case can be formally abandoned.

A court in Edinburgh will hear Megrahi's application to drop his appeal on Tuesday, with some believing he could be flown home as early as next Wednesday.

US relatives have reacted angrily to reports that he could be released, but both British andAmerican relatives are keen for the appeal to continue and for a public inquiry to be held.

MSP Christine Grahame and a number of relatives of the victims have raised serious questions about why the appeal is being dropped at this stage.

The Scottish Government has dismissed claims of pressure to drop the appeal as "baseless and ill-informed speculation".

Meanwhile, the US university that lost 35 students in the bombing has called on Mr MacAskill to remember the families' "tremendous loss and suffering" when deciding whether to release Megrahi.

A statement from Syracuse University read: "During this time our thoughts are with the Pan Am Flight 103 victims and their families and, as always, keeping the memories alive of those we lost.

"From the beginning we have wanted justice to be served in this case, and we hope the Scottish Justice Secretary fully takes into account the tremendous loss and suffering this terrorist act caused."

Given that Lord Salmond's Local Democracy minister is Mr Donald Trump of the USA, Sir Sean Connery of Switzerland his Foreign Secretary and Mr Brian Souter of Stagecoach his Transport Secretary, it is entirely possible that Mad Dog Hillary becomes his Justice Secretary. He can always blame it on the English, as usual, the horrid, thieving, greasy, fat fucker.

Kenny McCaskill, MSP, is a mealymouthed, prevaricating Scotch lawyer, adept at the bullying bombast of his grubby trade.

Dr Jim Swire, of the UK victims' relatives organisation, is convinced of Mr Megrahi's innocence and that two wrongs don't make a right, he has obviously done this small calculation forgetful of the wickedness of Clinton & Co, among whom any number of wrongs can be so construed.

As Metody always say prison not about revenge, but for place to get in touch with feminine side.

Perhaps it is time, then, Mr Jankowiak, that Mrs Bill Clitoris spent a few days in the pokey.