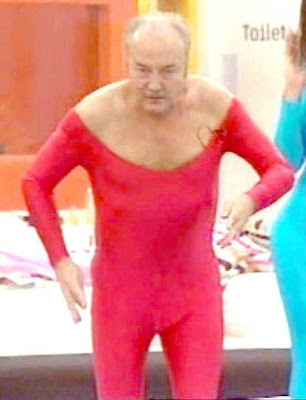 Here, in Egypt, as everyone knows, we are quite keen on manlove, when the alternative is a woman then most discerning Egytian gentlemen would prefer a boy, this has always been so. Visiting British MP, Mr George Galloway, however, is a long way from being either, as the picture above demonstrates.

Taken from an infamous British television show, the format of which is largely set around cruelty and humiliation, this shot reveals a shameless degenerate willing to do anything for money.

We do not want such people in Egypt. If the Brits choose to be ruled by creatures such as Galloway that is their affair. But Galloway rolling up in our ancient capitol with a busload of fawning fuckwits, pretending to be concerned about Muslims when all he is doing is seeking publicity, is ours. And our message to the foul, preening nancyman is clear. Fuck off, Effendi, or we'll chop your bleeding head off. Tell them that in Tower Hamlets, big boy.

mBankrupt it may be but given the population explosion and the concommitant implications for resources and allowing for even a modicum of the global warming hysteria to be based on truth, some form of communality of ownership seems to be the least objectionable of conflicting futurisms - a New World Order based on need rather than greed being the next logical step on a rocky road from slavery, serfdom, the military-industrial complex and its twin, GlobaCorp capitalism.

I know that the political ramifications of statist or pan-statist planned economies are anathema to you and I don't seek to persuade you of the benefits of such a form of organisation - you and I, in any event, will be in the Great Earthly Compost Bin by the time of such reform - but I regret bitterly that Galloway is seen as the Keeper of the collectivist flame, finding him, as I do, more objectionable than the reddest-faced, pin-stripiest, braying Tory predator.

It is a shortcoming of mine that I can only in the case of genius separate the artist from the art, my own impatience with the frailties of the former often obscuring the merit of the latter. Galloway is not a genius but a rather cynical manipulator of the utterly dispossessed, the alien, the voiceless outsider and his successive hypocrisies spoil for me any pleasure which I might derive from his eloquent chastisement of his fellow brigands. His radio shows and his columns in the otherwise derided RedTops bully and cudgel any who might differ, his torrential syndicated emails are shamelessly grandiose and self-adulatory, name-checking his egalitarianist greatness, cheap demagoguery playing to the fears of the frightened, the needs of the needy, his own needs, of course, lavishly catered for here, at his tailor's and in his Iberian villa.

Your observations, save one, are as lucid as ever but the idea that this aging, hectoring juggernaut personality is motivated by anything OTHER than personal gain seems to contradict everything I know of him.

As I said, it is a sign of the times that so shitpoor inferior are his co-accused that you and even I, occasionally, briefly, warm to his pompous doggerel.

There is a wider point, too, which has begun to fascinate me - the whole business of speechifying in an instantaneous media. I heard Obama, the other night, wriggling and squirming about the poor, mad Nigerian lad and his underpants bomb and heard the phrase "...however nimble our adversaries..." fuck me, nobody in politics says things like that, except Obama; nimble, brilliant, awarding respect and excusing the apparent clodhoppingness of the CIA, FBI, the whole fucking alphabet of bureaucracies, NSA, FEMA; adversaries, raising the game from mere enemies, an altogether more cerebral business than the Chimp's War on Turr.

Obama's speechifying, irritating, didactic and racist as it is is the best on offer to English speakers. Poor Kev in Australia is like a whining agony aunt; the Indians sing-and-song like Old Etonian maharajahs, goodness, gracious me-ing through filthy Untouchables, the fucking savages; at home, prime minister Snot attempts to distinguish his leaden cadences with over-articulation - sol-you-shuns, trans-pair-encies as he reels off a demented catechism of bogus tractor production statistics whilst the idiot-prefect, Cameron, spouts one exasperated, catty cliche after another. Only Obama says stuff like nimble adversaries and yet we know that for all his speechifying skills he is as fraudulent in his principled declarations, as malicious in his intent as has been anyone allowed near the Presidency.

In the room where I sit, some weeks after the event, people would have read the news of the Battle of Trafalgar, their children would have, similarly belatedly, read of the American Civil War, speeches and comments recorded in black-and-white in a newspaper of record, now the skymadeupnewsandfilth Times. Now, all is soundbitten, rehearsed over and over, repeated at us, as though we were imbeciles, repeated at us again, explained, deconstructed, as though we were illiterates, by the self-fellating Mr Nick Robinson or by Mr Anji Hunter, Adam Fatman Boulton, once a corner of the Blair-Murdoch-Business Triad.

As it is, few of them can even speak, much less make speeches; as it is, Mr TDG, all of them - even those like Galloway, gifted with a little facility - give talking a bad name. I am glad the Egyptians shat in his face.

That's the better picture of him. I expect they saw that mind-scaring clip of him with Rula Lenska.

I've never really been sure about Galloway. Obviously, the top line figure is that he's a self publicist who treats parliament with derision and has one of the crappest voting and attendance records. Yet, and it's a bit of a leap of faith yet - at least he's doing something. I've just seen a Labour MP in our car park and if I didn't work in the Town Hall I'd have no idea who she was and I dare say a lot of her constituents wouldn't. She's blagged all alowances available and yet 'remained within the rules' and as far as I can tell at both a national and a local level (she convened a few meetings when the banks were on the brink - which were relatively pointless) she's done fuck all with knobs on.

No fan of Galloway but no foe either.

A quick skim of "I'm not the only one," George's modest autobiog, might move you, Mr DTP, one way or the other. My own once reluctant view is that everything he "does," he does for himself, braying Tory, champagne socialist or cashmere Marxist, a pig is a pig is a pig.

Good to see you, Mrs WOAR.

A sentimentalist, but a gifted orator. Strange how the two often go together.

One might say, Mr TDG, that for someone like you to describe someone like him as a gifted orator is as stark a measure of Ruin as one could ever need.

Oh, he had fine sport with the big-haired Yankee senators and congressmen and he lights up the dismal green benches whereon thought and oratory have both withered but it's rabble-rousing, innit, so rehearsed and codified that it's almost Blairite. But with verbs.

Happy New Year to you.

To sell so obviously bankrupt an ideology with such wonderful aplomb is short of genius but not far off. And at least it is ideology rather than personal gain that drives him - had he chosen the mainstream no one could have stopped him, and he knows it. In a world of thieves and cowards that is something to admire.

Happy new year to you too, Ishmael.

My response, Mr TDG, was too many characters long. I have put it, therefore, at the end of the post and it should appear there soon.

Galloway is just a preening, gobby hypocrite. A Grade A cunt wasting his eloquence, a sordid teetotal corkscrew of a Wee Free. He is the Gordon Brown's lunatic little brother. "Look at me! Look at me!"

I am glad your response is merited by more than the criticism of my views, for I would otherwise be too indebted; all the more so for my imprecision in the use of "personal" giving the wrong impression. He is, of course, driven by a monstrous vanity, but more the vanity of seeing himself irradiated by a pure ideology than the vanity of seeking popular acclaim or worldly success: what he has of these seems to me to have been won *despite* his politics, not *because* of them. It is still vanity and still contemptible, but superior to the vanity of a Blair or a Cameron. Or so it seems to me.