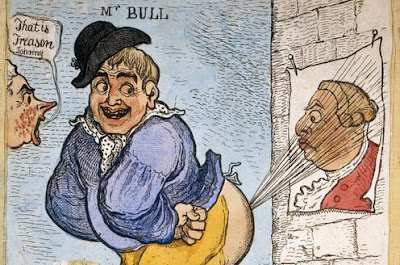 The cheery chappie boisterously farting in the face of the Georgian monarch is an early incarnation of John Bull. Not the neat fellow in the Union Jack weskit with bulldog, but the original, roistering symbol of the ordinary man who can detect the smell of corruption-heavy bullshittery by the powers that be and joyously farts in the face of the Establishment. Bit like us, really. I stumbled across this on Youtube:
All together now, one, two, three - FART.

That Youtube vid is damning. Its a very sad state of affairs when there is no credible alternative to the fat fucker. What a fraud he is.

brexit may or may not have been done, but given that boris jobsgone:

4) irreparably damaged the health of the nation by bullying citizens into submitting to unprecedentedly dangerous and ultimately ineffective vaccines - the testing of which was not only inadequate, but decidedly bent

5) allowed the criminal financiers, who had robbed their own banks, to refill their boots - under cover of the coronavirus-scam - with £450 billion worth of quantitative easing

6) handed out billions to buddies in bogus-coronavirus-contracts

9) wasted hundreds of billions on pointless vanity-projects - such as a redundant nuclear deterrent, a gratuitous hs2 railway-line, and dodgy chinko-froggy nuclear power-plants


we certainly were [done].

because following a deluge of dollar-buying - which has precipitated the collapse of the euro and sterling - interest-rates will now have to be hiked to the high heavens in order to attract currency-investors back to the pound and control runaway inflation...

unfortunately, however, this huge rise in interest-rates is of course set to decimate the uk housing-market, indefinitely.

because, looking on the bright side of life, the motherfucker-of-all-depressions will now also leave the middle-classes so damned skint they'll be forced to eat home-produced dog-burgers - all organically reared, naturellement...

and if hinkley point c goes critical, and blows a fuse, we'll never have to worry about anything ever again.