And now for something completely different

Drove right into it. Smash. Shafted.
Alfred has been passing Swona about six times a day every day, give or take a Lockdown or two, since November 2019, ignoring it really, no matter how provocative it was. Until on Tuesday, broad daylight and flat sea, Alfred decided enough was more than enough and that cheeky Swona needed to be taught a resounding lesson. Sharp end first, in went Alfred. 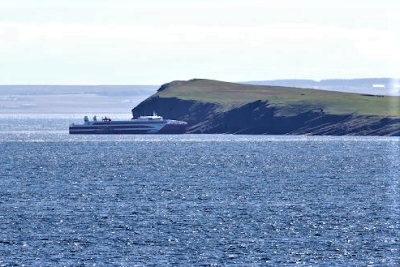 82 passengers rolling around the decks when Alfred shot into Swona. Bacon rolls and cuppa teas sloshing underfoot. Car deck full of freight and cars containing pets and suitcases all crashing into each other. Lifeboats came up from Thurso on the Scottish mainland and across from Longhope on Hoy 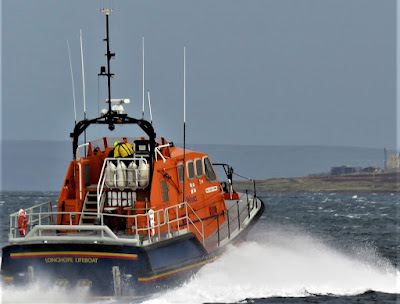 to evacuate most of the passengers, but an elderly woman on her hols coming up to stay with her adult daughter in Orkney suffered painful injuries including an open fracture of her arm, so couldn't get into the lifeboat and had to stay on deck, being made "as comfortable as possible" whilst Alfred was dragged off Swona and crawled into his berth in St Margaret's Hope. She was driven across the barriers into the Balfour Hospital and then air-lifted to Aberdeen for surgery.
One evacuee rescued his pet python by popping it safely down his trousers. Honest, not Invent.
Anyway, you know what mr ishmael would have said:
"Pissed again".
Not to worry, those who intend visiting Orkney this summer.  Alfred may be in boat hospital undergoing assessment and repairs, but the company has had his predecessor, the Pentolina, tied up at Hatston, for the last three years, all ready to be brought back into service. 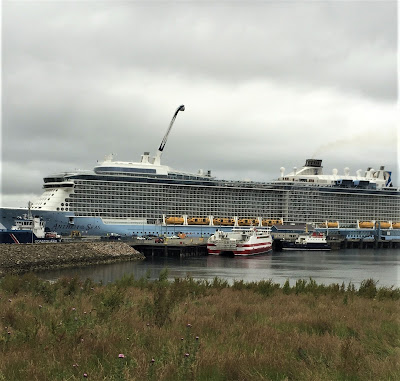 That's the little red and white one, snuggled up to the mighty Anthem of the Seas.
Posted by call me ishmael at 10:17

Did the island sail out in front of it, mrs i?

Symbol of the times, Mrs I: the good ship SS UK runs itself aground.

I like to think I saw all this coming when I emigrated, but in all honesty I never imagined it would get this bad.

"I were driving along, just minding my own business, as usual, when this island just jumps out in front of me".