HOW TO SPEAK COALITION 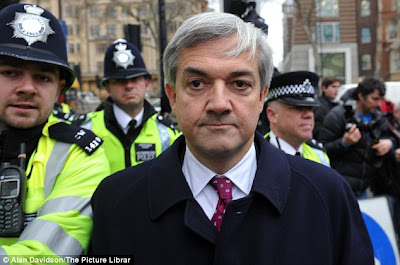 A COALITION MINISTER HEADS OFF FOR A NORMAL DAY OF LYING TO THE COURT.
I am perfectly entitled to my seventeen grand as I am entirely innocent of these charges as I am sure a jury will agree. All my team and I need to do is blacken the name of my wife in front of the whole world.  And our children, too, of course.  I won't flinch from thsi arduous duty because someone has to do it.  If I'm not to go to prison.
My wife made up all this shit simply because I stopped knobbing her and formed a deep amd meaningful relationship with Ms Carmina Trumpington-Carpet, a political activist, and boy, is she active, knows just how to treat me like a real woman, her, I mean, not me, although I''m not so sure, I am  a Liberal democrat, after all. Consensual shit eating within a loving relationship? Well, not so far.  But there's always room in a marriage for experimentation, although not with Ms Price and myself,  oviously, frigid old crow. And a liar, too, did I mention she's a liar?  Not fit to lick Ms Trumpington's Doc Martins?  Can't think why I gave her the best years of my life;  'snot as though she helped out in my career, apart from telling lies to the police, which, of course, if she did do, she did do behind my back, as I was most certainly the one driving the speeding car, although, of course, I wasn't, I would never do that, even though I have been banned for it despite my wife's best efforts to stop me being banned.  there will be no further statement until my lawyers have nobbled the CPS or, at worst, the jury.
( trans: I am the sort of cunt which no decent person would piss on were I on fure, as, in this world or the next, I most assuredly will be )
A DOCTOR WRITES.
People simply do not understand the very great pressure which we as ministers are under and my right honourable friend,  Mr Who, is, like myself, quite entitled to the measly seveneen thousand pounds Shut Up And Go Away Money he is claiming.  It is not easy, as I can confirm, to maintain a relationship with a pushy bisexual tart,  even for  a multi-millionaire property speculator and complete cunt,  like Mr Who is. 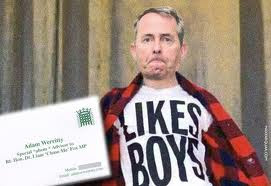 Dr Liam FucksYoungMen
I of course accepted my seventeen grand because quite simply I was hounded  out of Mr Werrity's arse even though I had done nothing wrong whatsoever.
( trans: I am the sort of cunt which no decent person would piss on were I on fure, as, in this world or the next, I most assuredly will be. )
THE CABINET SECKATRY SPEAKS Mr Angus  Maude, MP, cabinet seckatry  for punishment and hair loss.
Mr Bouffant, above, issued a statement through his adjutant.  Ve are eine family-friendly occupation power und zat is vy ve haff given Herr von Huhne so much money, zat he might spend some quality time mit his family, before he goes in Auschwitz.  Iff he vants to be mit his scrubberwomasn, Frau von Trumpington-Dildo, zat iss entirely hiss own affair. And zat of ze press und his proper missus and ze duly appointed military tribunal, vich vill probably haff him shot in a display of vot Herr stanislav, ze young Polish plumber describes as Up against ze vall, motherfuckerism. Sieg Heil, und remember liebschen, ve are all in dis schidt together.
Posted by call me ishmael at 14:56

My eyesight is not what it used to be, so I could be wrong, but is Hughne boz-eyed?

One looking at you, another looking for you?

Obviously sticking things up your bum has a deleterious effect on one's eyesight.

It's a good setup, this windmill thingy, burying New Age tote... sorry, incredibly useful things in the middle of seabed and than demanding tributes from peasants, for the sake of Gaia, iz all legal anyways...sez man on the telly. Some things will never go out of fashion. The Firm, recycling old ideas for (our) even better future.