Remember, Remember, the Fifth of November, Gunpowder, Treason and Plot.

Guy Fawkes  (13 April 1570 – 31 January 1606) was a member of a group of  English Catholics and  involved in the failed Gunpowder Plot of 1605. He was born and educated in York; his father died when Fawkes was eight years old, after which his mother married a recusant Catholic, thus leading the little boy into Catholicism.Together with Robert Catesby, who planned to assassinate King James I and restore a Catholic monarch to the throne, the plotters leased an undercroft beneath the House of Lords; Fawkes was placed in charge of the gunpowder that they stockpiled there.   The authorities were prompted by an anonymous letter to search Westminster Palace during the early hours of 5th November, and they found Fawkes guarding the explosives. He was questioned and tortured over the next few days and confessed to wanting to blow up the House of Lords. Immediately before his execution on 31 January, Fawkes fell from the scaffold where he was to be hanged and broke his neck, thus avoiding the agony of being hanged, drawn and quartered. He became synonymous with the Gunpowder Plot, the failure of which has been commemorated in the UK as Guy Fawkes Night since 5 November 1605, when his effigy is traditionally burned on a bonfire, commonly accompanied by fireworks.

The Brighton hotel bombing was a Provisional Irish Republican Army (IRA) assassination attempt against the top tier of the British government that occurred on 12 October 1984 at the Grand Brighton Hotel in Brighton, England. 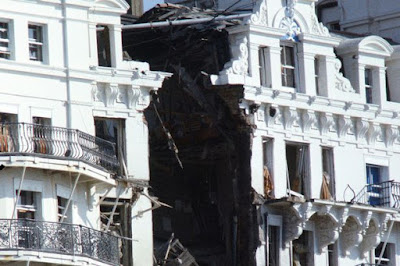 A long-delay time bomb was planted in the hotel by IRA member Patrick Magee, with the purpose of killing Prime Minister Margaret Thatcher and her cabinet, who were staying at the hotel for the Conservative Party conference. Although Thatcher narrowly escaped the blast, five people connected with the Conservative Party were killed, including a sitting Conservative MP, and 31 were injured. Margaret Tebbit, a former nurse, was paralysed in the bombing as she was staying at the Grand Hotel with her husband, Norman Tebbit, then Secretary of State for Trade and Industry, during the Conservative Party Conference. After the bomb explosion she spent two years in Stoke Mandeville Hospital and the Royal National Orthopaedic Hospital, undergoing treatment in their spinal injuries units. During this period she recovered some use of her hands and arms. Very interesting juxtaposition of the gunpowder plot and the Brighton bombing. It had never occurred to me before. I visited Brighton on business (must have been late 80s from memory); it had been rebuilt, although this date seems a bit soon after the bombing, but it must have been then. I decided to stay at the Grand Hotel (on expenses) and insisted on staying in Thatcher's room - they may or may not have given me that room, I don't really know. But it was a pokey little room; can't say I was impressed by the room, the hotel, or indeed Brighton - couldn't find a decent Indian restaurant. Glad to get back to London, which then in the late 80s was better than Brighton.

Magee, despite being given numerous life sentences was released under Blair's Good Friday Agreement. How times have changed from Guy Fawkes days.

Something that hasn't changed, mr mike, is that the generals don't put themselves in danger and they usually line up a fall guy to deflect attention from the real movers and shakers: who sent the anonymous letter that caused the search of the undercroft and unearthed Fawkes? Patrick Magee was a footsoldier. Megrahi was acting under orders. All this has happened before and will happen again, is happening again, with every terrorist attack. Britain has now moved from a severe to a substantial threat level, which means that an attack is likely.
How many attempts have there been to kill politicians en masse? We will never be told about all the foiled enterprises, but these two doomed, romantic Catholic attempts to blow up the British Government are certainly linked. Interestingly, Fawkes remains embedded in annual celebration and mythology, adopted as an avatar by Paul Staines as an emblem of opposition, but Magee, despite being far more successful in that his bomb exploded, creating loss of life, injury and massive damage, has almost faded from the public imagination. Well, that outcome was to be desired, given the rewards and legitimacy his generals have gained.
Mr ishmael and I also visited the Grand Hotel around the same time that you did, mr mike, just to rubberneck, but found that the place had been rebuilt very swiftly - more swiftly than Mrs. Tebbit was.

Stirrings on the streets, mr bungalow bill - Anti-lockdown and Million Mask March protestors clashed with police in Trafalgar Square over the second national lockdown as well as the law around wearing masks. In a fabulous irony, many anti-mask protesters were masked in Guido Fawkes masks. Brave or reckless, Piers Corbyn, 73, stood among the crowds with a megaphone despite being fined £10,000 for his part in a previous rally.
Have I strayed into some strange, surreal, dystopian alternative Universe?
Throw another shitcake on the fire and get on with sharpening those sticks.

Mrs I: its clear to me that there are now forces outside of normal democratic and judicial mores which rule our lives. Does that sound too naive? Just look at the way that Trump has (fraudulently) been de-throned (I'm not a fan BTW), and the speed with which the EU leaders have applauded Biden. Meanwhile, we (including Aus and UK) will continue to bomb "3rd world shitholes" for not being democratic.

We should not be surprised by any of it. I have before-before recounted here the story of my red pal who said that it was incumbent upon him to achieve his marxist glory for me whatever I thought about it. Democracy is not the point. You damn well will live in my socialist utopia or else.

This though will end in blood and terror. Who else thinks that a certain sleepy someone is of more use in a certain physical state - that need not be typed here - than he is out and about sniffing young ladies' manes?

And Donald will make it a desert and call it peace. My patrician WASP Democrat friend is coyly silent since we exchanged emails as the early votes came in. Too far even for her. I reckon. I must buy in more beer and popcorn.

The tranquility of submission will be ours, Mr Mongoose. We shall know that it is good for us. Mr I’s New People are inheriting the earth, for which they have been carefully prepared. All is well, until it isn’t.