After 15 years in which it had elected seven increasingly incompetent, half-wit gabshites as  leaders:

He has a statue, as Father of the Scottish Parliament 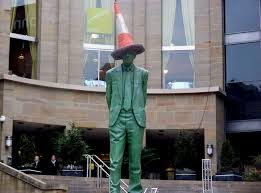 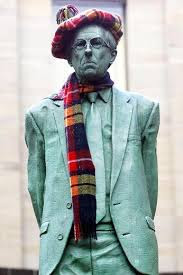 b ut people keep vandalising it,
dressing it up in Tribesman clobber. 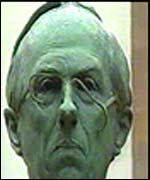 and breaking its spectacles. 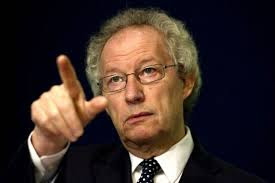 Henry McThief.
Briefly Labour First Minister.
Confused office rent payments with his own money, like you do.
I resigned because I had done nothing wrong. And because after a few months in the job I can have a fifty-grand a year pension.
Yes, for life.
Yes and still work for Labour.
Only not near the petty cash. 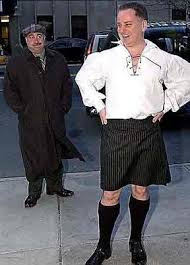 Jack McConnell, cruising in New York.
Labour First Minister.
A national, arse-clenching embarrassment.
Lost power to Alec the Fat.
I retired and took up a seat in the Lords only because the people voted the wrong way. 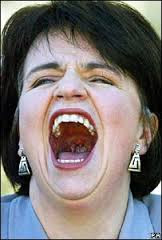 Wendy Alexander.
Briefly Labour leader.
Dougie's sister and Brown protege.
Accepted unlawful donations to her election campaign.
I resigned because I had done nothing wrong.
The donations from gangsters were just a misunderstanding.

Ian Grey.
Briefly Labour leader, lost badly to Alec the Fat.
I resigned because I  did nothing wrong.
It is not a crime to be stupid
Not in front bench Labour politics 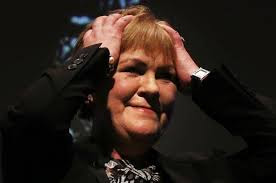 JoLa.
Briefly Labour leader
lost badly to Alec the Fat and Gnasher.
Pissed-on by Ed Miliband & Co.
I resigned because they're all cunts in the Labour party. 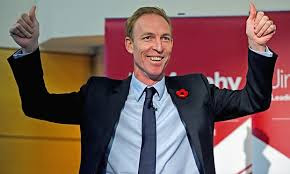 Jim Murphy.
Briefly Labour leader, never even an MSP,
Spud the Blairite lost every Scottish  Labour Westminster seat, bar one
I resigned because the people voted the wrong way.

After this procession of crooks, nitwits and Gordon Snot proteges, the Scottish  Labour party has now gone the whole hog and decided to elect, as leader, nobody at all.

I mean, said, one of the eleven remaining Labour voters in Glasgow,
nobody's gotta be better than that shower, d'ye ken?

Ms Nobody, above,
enveloped in a cloud of invisible soundbites about loving the party and working tirelessly to rekindle its historic mission, because that's the sort of person she is;
a woman whose profound, yawning  nothingness guarantees the total eclipse of traditional  Labour in Scotland.
Not before time.

Craig Murray's got it that she received 5700 votes which is equivalent to a local Councillor with a decent turnout. She's effectively the lass down the supermarket who you chat to about the new traffic lights. Ah, Labour, fit for fuck all.

They did have a Corb-alike, a former union guy, sensibly radical, who would've galvanised not the Labour MSPs, who are shite, but a national movement of the Disappointed. But he was stitched-up by the Murphyites, much good it did them. 'Sabout right, mr dick, the girl down the supermarket, Gnasher'll bite her tits off and shove 'em up her arse. So to speak.

Jesus. What a shower! It is no wonder that they have lost the entire country to the Tribesmen. Is it, do you think, because all the talent - such as it is - flees to the Westminster gravy train?

Depends, I suppose, on whether or not you buy-into the belief that John Reid, Gordon Brown, David Steel, Robin Cook, Charlie Dipso, Andy Marr, Andrew Neil and Kirsty Wark are talented, and I don't.

Scotland, don't forget, is a place which venerates the Proclaimers, a duo simultaneously ugly, shouty, pushy and lacking any discernible talent, just like Scottish politicians.

Even I voted SNP, the once, in order to throw-out the buffoon McConnell in preference for the buffoon, Salmond. This ongoing scandal of leadership election-rigging should see New Labour's ashes scattered in the Clyde and maybe, as you forecast, speed the emergence of Citizen Osborne. Scottish Labour MPs, ministers and MSPs have worked diligently for this Tory triumph.

We tend to forget you have an extra layer of human rubbish to deal with up there in the best part of England, Mr Ishmael. As if the Westnonster shower wasn't enough, devolution has created more filthster collectives. Even so that`s a right shower of shite you`ve showed us. No wonder a plausible villain like Salmond ran rings around them.

The Mandelserpent is advising the Eurocrats how to prevent UK secession. Nice. There's a professional politician for you, scandalised that anyone could ever conceive of such insubordination. The very prince of corruption and Moustache and Fat Al (insofar as we can muster interest down here) are his heirs: power at all costs on the back of useful idiots. Of course, they all hate those whom they charm and entrance, that's what psychopaths do.

All my life, mr tdg, I have maintained that pursuing a career and performing public service cannot honorably co-exist, that the Rewards of Obedience are such that no decent person would seek them and yet the nation applauds this contradiction. I have seen a good deal on the box, recently, about the hallowed birth of democracy in Athens, for all the contradictions, then, the exclusions, the slavery, the arrangements made fof citizen power seem superior to what we are currently witnessing, here, in Europe and in Washington.

Gnasher is enacting a land grab, presently, mr yardarm, encouraging what she calls community buy-outs of the vast shooting and hunting estates, a la Mugabe, same populist sophistry. Be interesting to see if HamFace and BukkakeBoy send in the troops to protect their gilded cousins, interesting to see how our new, tooled-up, Scottish State Police react, now that ChiefConstable McSlag is responsible to the First Minister, and beholden.

In any other amalgamation of nation states than the United Kingdoms, Scotland would be seen as heading rapidly towards BananaRepublicanism, bent cops, bent judges and lawyers, bent politicians, yet the voters, many of them, would rather wallow in a grievance which, even when it was fresh, was counterfeit, and in a so-called Enlightenment which would never have happened without the Union, and which forgets Scotland's enthusiastic prominence in the slave trade.

I should write more about Scotland. Later.

If anyone wants to see past the myth of Scotland's superior jurisprudence, Megrahi's own book, shines a light on the McLearned ones.

He is a jaded old whore, Mandelstein, is he not? Since acorrupt ministerial career - see mr tdg, above - he has, like Tony'n'Imelda, worked for loads of criminals, the Rothschilds, any number of Russian what we call oligarchs, crooks who have, post-Gorbachev, plundered Russia and colonised London and now, you say, he is working for the Union of non-Socialist EuropeanRepublics. I hope his arse falls out but that he lives lomg enough, like Harriet Harman and the rest, to see his presumption and his entitlement properly derided and confiscated. It is a bit exciting, the choir of dissent which Corbyn now conducts and great to see how the more they shriek and conspire, the more scorned are the dregs of NewLabour.

I have started my Six Weeks of Mornings, in the oxygen tank, and may have blogging time on my hands, although now that the Commentary on Ruin has never been so well provided-for, one almost doesn't know where to start.

Rest and reflect in that tank, Mr I, and it will come to you. Hope it does whatever it's supposed to do.

There is a reason though, isn't there, that Scotland's acres are owned in the squillions by half-a-dozen inbreds. Speak quietly, but it it is the same reason that the o'mongoose cousins' estates in Connaught are left unstolen. They are by-the-yard worthless. Except now in law-driven possession rights pointed at the offshore/underground/above-air, the unknown when property rights were first thought out. The Falklands, for instance, are akin now to the New Fracking Lands but with blood as well as cash in the sand. The game is longer than any man's life's despair can bring to justice.

And this is the only idea in the Fatman's head. A very shallow and silly plan. As if the Brits hadn't been doing this for a thousand years.

Aye, and if it was to be a genuine redistribution that would be one thing but Gnasher knows nothing of genuine and this will be a gifting from one set of unspeakables to another, not unlike Thatcher's theft of the council housing stock, of the nation's resources and assets, stolen property fenced to her spiv backers. Tebbit still alive, is he? Soon be on his bike, I'm sure, pedalling to Hell, for a reunion with the baroness, with Messrs Saville, Brittan, Morrison et al.

Dunno if you are aware of it but Simpering John Swinney recently raised the stamp duty on houses like mine, while writing-off massive council tax arrears of the Righteous Tribesmen and freezing, yet again, the current council tax, the infrastructure is falling to bits but who gives a fuck about that, as long as we avenge some mythical freedom fighter from eight hundred years ago?

I have brought some Lapham's Quarterlys, mr bungalow bill, best fifty quid a year I ever spent, two and a half thousand years' worth of writings,brief and extended, on poetry, philosophy, politics, theology, drama, architecture, science, music, art and much else, attractively set, illustrated and edited, Desert Island reading. I cannot recommend it enough, or as we say, now, in punditspeak, it is impossible to underestimate how good it is. IMOH. Smiley Face, Lol out-loud.

There is an article about LQ by the, I think,Smithsonian Review, The Scourge of Buzzfeed, or something, which is worth five minutes. Publisher, essayist and satirist, now eighty,I think, and elegant West Coast patrician, he is Uncle Sam's AN Wilson, Doctor Johnson, Bron Waugh,with a bit of refined Hunter Thompson and Lenny Bruce. I am global subscriber twenty-five thousand and one, you could do worse than becoming number twenty-five thousand and two.

Thanks Mr I. I've read some of his stuff and the prose is superb. I'll look more closely.

Talking of land reform and ownership (my pet obsession ), does anyone here follow the work of Andy Wightman? He would appear to be doing a lot of good work on Scottish land reform topics...

I have just had a look at his blog, mr tbh, but it is too dense for a quick skim, too academic for a lout such as I. It is a very big topic and might unsettle other interested parties than just the landowners. I am not opposed to a long overdue reform of ownership and information thereupon, it is just that I believe Sturgeon to be be more venal and stupider than her counterparts in Westminster, Mr Wightman seems a little perturbed by Holyrood, also.

It is a bit heavy going sometimes! He also wrote an excellent book called something like "who owns Scotland and how they got it" which while similarly academic is very interesting indeed.

It did look interesting, that one, I will ask the library for it. A similar examination might serve the English, too, mr tbh.