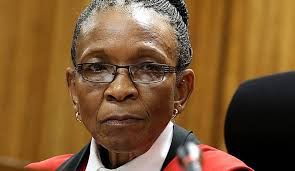 We said at the time that she was out of her depth,  her summing-up illogical.  She couldn't even read-out accurately her own judgement.

Maybe she was unnerved by the global attention to the case;  if so, she should have excused herself in the interests of justice, as should our own,  recent Judge Weepy.

Her failure to try this case properly has caused distress to the relatives of the victim, to groups already feeling hard done-by:   women victims of violence; more harshly sentenced black South Africans; ordinary citizens concerned by levels of firearms-related violence and, poignantly, to Pistorius, himself.

Obviously a fuck-up, he believed he had won yet another victory against the odds, now he's facing  maybe another ten years or more in prison, having been released under house arrest. His career is now obliterated, not even Nike or Adidas or Rolex will sponsor a murderer, not even the criminal organisation, FIFA, would give him houseroom.  Better by far that he had been dealt with justly in the first place, he would now be settled into his sentence and realistically considering life after release, perhaps confronting his own offending behaviour.  It is never pleasant to see a rash young man being sentenced to a long period of imprisonment but if anybody needed to go away it was Oscar Pistorius;
confused and bungling, JudgeThokozile Masipa, failed him, too. 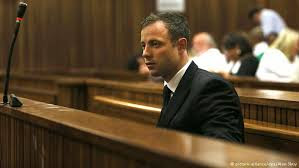 Maybe his resentencing will take into account the impact on him of Judge Masipa's incompetence and partially mitigate the new sentence.
If that happens he will have been much more blessed than was his victim, but we should expect more from the state than from the offender.
Posted by call me ishmael at 02:34

As you imply, Mr Ishmael, the process itself is not supposed to be the punishment. And while the idiot is the idiot, I cam sick to death of governments around the world deciding that they may have as many goes as they want to bully their citizens into line. This one examplke of justice is not enough to outweigh all the other examples of bullying and vileness. Fuck panto justice for once and let the bastard creep home to what is left of his miserable life.

There is also the suspicion that the original judge's was a political appointment in the first place - a black woman, trying a wealthy white murder case - although one which backfired rather drastically for those promoting such a, what, psitively discrimnatory agenda, as she was clearly incompetent. I may be entirely wrong, here, maybe most SA benches are black but if we set that racial conmsideration aside itis generally presumed that female lawyers and judges are generally more robust in cases such as this; now we have a greybeard, sorting things out.

There is merit in what you say, perhaps unarguable, and it is distasteful that, once sentenced, he should now be resentenced, through, oddly enough, no fault of his own.

I dunno, I just hope that he is not, in additi9on to his own offence, punished for that of the judge.

Having said all that, I now realise that a longer term for Pistorius would not serve justice; maybe the revised verdict and a rigid enforcement of his house arrest, for the full original term, would be better. That he is a wretch is beyond doubt, I don't know if we counter that by making him more wretched.

If there is additional punishment to be meted out here, it is for his lies. Dishonesty blazes in his face, in every gesture and expression, and it is obvious enough in denying conduct that has no other plausible explanation, rational or otherwise.

The ineptitude of the trial judge was striking, and the appeal court made it no less so by their bizarre compliment on her character and abilities.

We skirted this a while back, mr tdg, the fact that however outlandishly dishonest the defence, once convicted, its author is not penalised for perjury.

Pistorius's life story seems to me more cruel even than that of Andy Murray, what parents would push a double amputee child to sprinting? I cannot imagine.

I think that the only sound statement from the Greaybeards' Court was that this was tragedy on a Shakespearian scale, far-reaching, affecting, convoluted, cruel and tragic, the dishonest engineer hoist with his own petard.

The problem is obvious. As the rainbow paradise was being attained in South Africa long ago, I recall hearing a leading South African lawyer bemoan the falling standards of the judiciary.

I believe, in passing, there is, somewhere, a record of Cameron-on-Mandela, the prospect of the nigger-terrorist being released, although he would not, now, stand by his then beliefs.

I recall similar remarks, at the time, and although I forthrightly ridiculed the idea of immediately making president a man who had just spent thirty years in durance vile, I probably would have considered the remark you quote as racist, belittling and contemptuous. I am not sure that I still would.

The majority may have learned something through a proper accounting for the crimes of apartheid, but they were denied, the horrid little Desi Tutu, front and centreing, overstepping himself, denied Justice its day, annointing Sentimentality instead, Troof and Reconciliation, maybe that touchy-feely horseshit coloured the practice of Justice Wotsername and her colleagues.