WHAT THE PAPERS SAY. THE HINDU (HONEST) 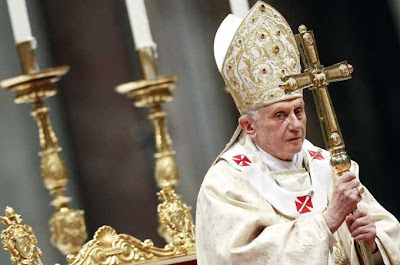 RATSO. GOT THEM OLD FEEL LIKE I'M FIXIN TO DIE BLUES.

Pope Benedict XVI celebrated Christmas midnight Mass on Friday and in a sombre reflection during his homily noted how the promise of peace brought by Jesus’ birth has yet to be fulfilled. Just like the proper prosecution of the millions of nonces employed by Benny the Nazi.
Thousands of people flocked to St. Peter’s Basilica for the ceremony, while many more followed the proceedings on giant video screens in St Peter’s Square, on a mild but wet winter’s night.
“This child (Jesus) has ignited the light of goodness in men and has given them strength to overcome the tyranny of might,” the pontiff said in his homily." Und zat is vy ve must fuck ze little children up ze arse und in ze mouth. Happy Beastmas und Heil Hitler"


Later, during Holy Communion, the pontiff joined other clerics in handing  out free johnnies  to the faithful.

The mass took place amid tightened security measures following last year’s intrusion by a mentally disturbed woman aka a woman enraged by all the filthy noncing bastards getting away with it.
It began with Benedict, wearing gold—embroidered robes and his bishop’s mitre, walking into the Basilica in procession with other clerics. The pontiff stopped occasionally, briefly greeting well— wishers, many of them holding each others cocks.
During the same procession in 2009, a Swiss—born woman, Susanna Maiolo, leapt over a barrier and lunged at the pontiff, knocking him down. Benedict was unhurt in the resulting fracas, but an elderly cardinal suffered a broken leg. And serve him fucking right.


Maiolo had already tried to accost the pontiff during the 2008 Christmas Mass but was blocked by security guards.

As in 2009, Friday’s midnight Mass began at 10 pm (2100 GMT) instead of midnight — an earlier slot aimed to give the 83—year—old pontiff a few extra hours of sleep before his Christmas Day duties, the Vatican said. It is hard work for the old bastard, shepherding all these beasts out of Harm's way and into noncing pastures new.
Posted by call me ishmael at 03:59

""Pope Benedict XVI celebrated Christmas midnight Mass on Friday and in a sombre reflection during his homily noted how the promise of peace brought by Jesus’ birth has yet to be fulfilled.......But this joy is also prayer: Lord, make your promise come fully true. Break the rods of the oppressors.""

Silly old goat. Does he want to be out of a job. It is only the potential to preach "salvation my way" that keeps the clerics in the lap of luxury.