Archbishop calls on nation to ‘bear the load together, without getting too carried away with things’

The Archbishop of Canterbury called on the wealthy in particular
not to share the load PA
The Archbishop of Canterbury will use his Christmas sermon to call on rich and poor alike to share in the hardships brought on by the financial crisis and cuts in public spending. But mainly the poor, who will, as promised  in the greatest teaching of the Established Church, after all, get their reward in Heaven. And if they believe that, then, fuck me, Jesus, they'll believe anything.
Reflecting on the mutual dependence of humans, Dr Rowan Beard will urge people not to give in to the temptation of abandoning others to suffering, whilst they secure their own safety. But not, obviously, so that rich people have to give up their hard-stolen wealth.
“Faced with the hardship that quite clearly lies ahead for so many in the wake of the financial crisis and public spending cuts, how far are we able to sustain a living sense of loyalty to each other, a real willingness to bear the load together?” he will say.
“How eager are we to find some spot where we feel safe from the pressures that are crippling and terrifying others? Not very, would be my my best guess."
“As has more than once been said, we can and will as a society bear hardship if we are confident that it is being fairly shafted, I mean fully shared.” continued the dreadful old hypocrite, dribbling into his apostolic  beard.
The Archbishop will say that people need to show commitment to their neighbours and that there was no single interest group or pressure group that could “opt out” of carrying the load. Apart from the rich,  of course, traditionally benefactors of the Church and traditionally able to  opt out of Decency, buy themselves indulgences, cathedral funerals and the best seats in Heaven.
He will say that confidence can only be restored if people shared in the burden of “constructive” work together - ie, applaud the coalition as it slashes living standards.
He will call upon the wealthy in particular not to carry part of the load.
“That confidence isn’t in huge supply at the moment, given the massive crises of trust that have shaken us all in the last couple of years and the lasting sense that the most prosperous have yet to shoulder their load,” he will say. "But, you know, as the Saviour says, in the New Gay, Lesbian and Transgender Bible, the Poor ye have with ye always. And what this means, in a very real sense is Fuck 'em, if they wanna stand for the three-card trick, that's their look-out. In my Father's house there are many mansions, but not for the Poor, who must sleep on the streets, if they fall behind in their mortgage payments.  Consider the lilies of the field, they toil not, neither do they spin but the poor must work their arses off."
“If we are ready, if we are all ready, to meet the challenge represented by the language of the ‘big society’, we may yet restore some mutual trust. And a proper conservative govament.”
The Archbishop speaks of his anticipation of the royal wedding next year between Prince William Dunce and Kate Middleton.
He will say Christian marriage was a “sign of hope” and express his own hope that the royal wedding will encourage people to think about marriage. Not in a judgemental way, of course, for arse bandits and carpet munchers and ladymen are equally sacred in God's eyes, and make up, of course, most of the clergy. Apart from in Africa, where for fucks sake, they carry on like cannibals, as though decent white missionaries never went out there and civilised them, in the name of the One True God, Money.
“It would be good to think that in this coming year, we, as a society, might want to think through, carefully and imaginatively, why lifelong faithfulness and the mutual surrender of selfishness are such great gifts,” he will say." And why bishops and archbishops set such a good example by living in palaces on huge salaries and pensions."
"You may think that as the unelected, Devil-worshipping, heathen bastard, public school  bullyboys and toilet creeping hypocrites are dragging the country backwards to the nineteen-thirties, robbing the sick and the blind and turning to shit everything they touch, that it was high time for a turbulent priest   to get up there in the pulpit and do some cunting of the UnFuckingGodly.  But you'd be wrong. As it says in the Book of Money, Render ye unto Caesar, or in this case, the Chancellor, Brother  Spunkface, that which Caesar wants and be fucking quick about it, if Ye don't want thy Heavenly Father to roast your arse with his fiery finger.  The Mess is over, make the sign of Ruin to your neighbour and fuck off, until next year."
Oh yes, fuck me, I nearly forgot, as I mentioned in my sermon of doom, the future King, Prince Gormless,  is getting married next year and as the unelected prime minister, Brother Bullingdon says, This is just so incredibly good for the nation and the coalition that he can't believe his luck, again.  This will obviously cost a fucking fortune, I mean, my time doesn't come cheap, and there's all the Crowned Arses of Europe to be flown in and put up in splendour, so maybe you can all make a significant contribution to the offertory plates now coming amongst you.  We are all,  very much like the early Christian martyrs,  in this shit together, or some of you are. Amen." 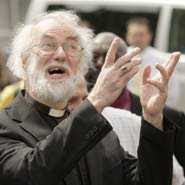 Email ThisBlogThis!Share to TwitterShare to FacebookShare to Pinterest
Labels: beardy

I see cast iron has decided to make the royal wedding more frugal due to the fact that we're fuckin broke by giving us all a public holiday and spending £100m on policing the wankfest.
That'll be another £1Bn wasted so that some cock who happened to pop out of the right fanny will marry some poor sap who will be set adrift to be picked off by the NOTW once she has produced an heir and a spare.
Surely someone can get to Kate and say ' NO ! Don't be a fuckin idiot. Don't marry into a bunch of fuckin spastics '
Probably not. The BBC's Royal anus rimmer Witchell will be writing her ulogy as we speak. Cunts.