The world's leading liberal voice, the Guardian, today publishes a comment piece by Chris Huhne, in which he blames the Murdoch press for dissing politicians and for breaking-up his marriage;  so far several hundred people have engaged in debate with him, tossers 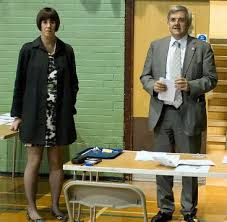 EX-CON: Murdoch ruined my marriage.
Oh, no, he didn't.

It was Huhne, wasn't it, who claimed seventeen and a half grand from us - and him a millionaire - for having to - as a result of his own criminality -  step down from the cabinet?
Posted by call me ishmael at 03:37

There's something of the raddled old hooker about Ms Trimingham in that picture.

Great to have you back Mr I.

"several hundred"? Didn't realise the Graun had so many 'readers'.

PS: Along with Hoover and Biro (among others) his (unsavoury) name has now been assimilated into the English language (at least in the blogosphere) thanks to his shenanigans.

It's an obvious bit of advice which Blair, Mansch, MacShame well, most of the bastards fail to take - 'oh, do just shut the fuck up, will ya?'

Hello Mr Ishmael, glad your back writing again, your blog cracks me up.

His trousers look neatly pressed in the picture. That cost the tax payer £119, money well spent eh? He even claimed for hobnobs. A multi-millionaire claiming expenses for biscuits! Murdoch can be blamed for many things but how is he to blame for Huhne being an adulterous, tight fisted, lying git?

My own behaviour has not helped, and I am not proud of that

This carries the implication that somebody else's behaviour is also involved, diluting the blame.

Note how he uses the construction 'not helped' when the simpler statement is 'I was wrong'.

I am not proud of that

"I did wrong and I am ashamed of myself " is how a contrite piece ought to open. Instead the blame-shifting and spinning is so deeply ingrained in him that he probably thinks that was what he was doing.

I did not get any further than that as I began to feel sick. I trust, therefore, that Mr Ishmael has caught the gist of this and has once again taken on the arduous task of keeping an eye on this shit so that we don't have to.

This is a co-operative effort, mrs woar and your deconstruction is most helpful. My gripe is not so much with him, I have always had his measure, but with Guardian editor, Arsebridger and withhis readers, hundreds of whom extended Huhne the courtesy of polite discussion of his dire hypocrisy. The world has truly turned to shit.

That`s tax dodging zero hours contract promoting Rusbridger isn`t it ? No wonder he gave Huhne a platform; pity it wasn`t the fucking gallows for the pair of them.

Yes, he' your man, pays himself a million a year, because he's worth it?